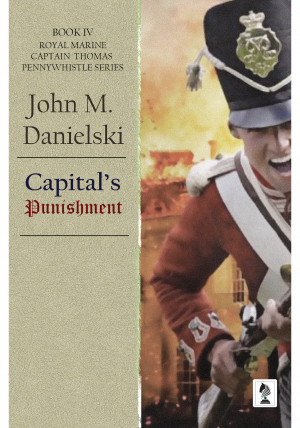 John Danielski believes you learn best by doing and actually carried out many of the ordinary tasks Tom Pennywhistle performs in The King’s Scarlet. He worked his way through university as a living history interpreter at historic Fort Snelling, the birthplace of Minnesota. For four summers, he played a US soldier of 1827; he wore the uniform, performed the drills, demonstrated the volley fire with other interpreters, and even ate the food. A heavy blue wool tailcoat and black shako look smart and snappy, but are pure torture to wear on a boiling summer day.
He has a practical, rather than theoretical, perspective on the weapons of the time. He has fired either replicas or originals of all of the weapons mentioned in his works with live rounds, six- and twelve-pound cannon included. The effect of a 12-pound cannonball on an old Chevy four door must be seen to be believed.
He has a number of marginally useful University degrees, including a magna cum laude degree in history from the University of Minnesota. He is a Phi Beta Kappa and holds a black belt in Tae-Kwon-do. He has taught history at both the secondary and university levels and also worked as a newspaper editor.
His literary mentors were C. S. Forester, Bruce Catton, and Shelby Foote.
He lives quietly in the Twin Cities suburbs with his faithful companion: Sparkle, the wonder cat.

You have subscribed to alerts for John Danielski.

You have been added to John Danielski's favorite list.

You can also sign-up to receive email notifications whenever John Danielski releases a new book.