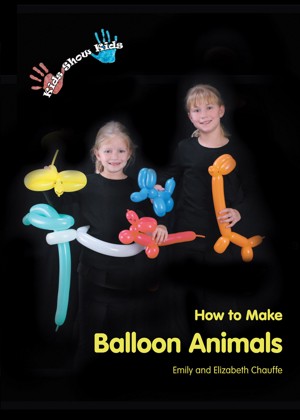 By Emily Chauffe
Seven-year-old Elizabeth and ten-year-old Emily will show you how to make animals and other balloon projects with twists and grips that even small hands can do, all shown in full-color photographs.

Worried that your balloon might pop? This book warns you when the twisting just might burst your bubble! More
When faced with books full of long instructions and line drawings that were often hard to follow, Emily and Elizabeth set out to make the ultimate balloon animal twist book -- for kids, by kids, with every page in full-color photographs.

They left out the complicated designs and twists that required big hands, keeping only the projects that were fun and simple to learn. The book starts with seven-year-old Elizabeth's easiest balloon twists and works up to ten-year-old Emily's more advanced three-balloon creations.

Included are suggestions on how to buy a pump and balloons, as well as warnings for noise-shy twisters who want to know when a part of the project needs extra care to avoid popping the balloon.

Emily Chauffe was ten years old when she first attended Magic Camp and began making balloon animals. She asked her mom to buy more books so she could expand her balloon twisting skills, but the books were made for adults, difficult to follow, and frustrating.

So she and her younger sister decided to make their own book, spending an entire summer making balloons and perfecting the explanations so that other kids could follow easily.

In 2011 she is still attending magic camp, has mastered juggling, invents her own rope tricks, and is working toward becoming a counselor.

How to Make a Bee Balloon Animal Twist
Elizabeth Chauffe, co-author of "Kids Show Kids How to Make Balloon Animals," shows little kids how to twist their own balloon animal bee. She's 7, and this simple animal is easy to make for beginners.

You have subscribed to alerts for Emily Chauffe.

You have been added to Emily Chauffe's favorite list.

You can also sign-up to receive email notifications whenever Emily Chauffe releases a new book.