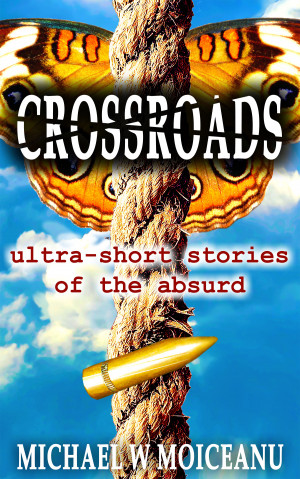 Crossroads: Ultra-short Stories of the Absurd

I was born within a Stalinist regime in Romania during 1974, and immigrated with my parents to Southern California on political asylum at the age of seven—where I currently still live. My professions—to the extent they may be so called—have varied greatly over the years. Through reading and practice, I’m still learning how to improve my creative writing, oil painting, and photography. Much of my current free time—when not occupied with distractions—is spent in reediting an extensive philosophical work concerning metaphysics and epistemology. And—as though the just mentioned weren’t ambitious enough—I’d like to someday remedy never having produced the semi-industrial music album I was working on during my university years. I love the beauties of life and of humanity’s better aspects—these being often easy to take for granted—and find that my awareness of them is often best sustained by my also being attentive to life’s harsher truths.

An interesting collection of short pieces. Best though if not read in one sitting.

You have subscribed to alerts for Michael W Moiceanu.

You have been added to Michael W Moiceanu's favorite list.

You can also sign-up to receive email notifications whenever Michael W Moiceanu releases a new book.