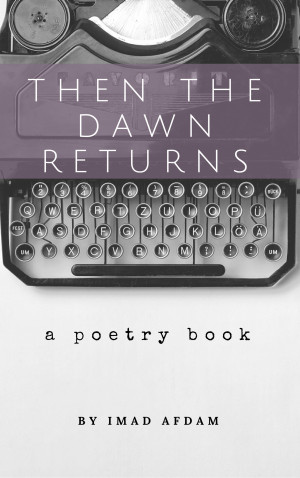 Then The Dawn Returns

By Imad Afdam
Rated 5.00/5 based on 2 reviews
The book entitled Then The Dawn Returns is a poem on poetry, humanity, love and life. It involves 63 poems that launch the reader into a journey of reflection and profound sensation of what it is to be a human in this modern world. Perhaps the answer to that question is love, and poetry is its Ambassador, because poetry, is the only evidence of life in the Milky Way.

Imad Afdam is a Moroccan Poet and Playwright. He's an English Studies Bachelor and a recent Masters degree Laureate in Foreign Languages and International Affairs.
During his Academic field trip in Anthropology in Germany and Czech Republic, he penned his first poetry book in English language and decided to publish it online as an Ebook and a Paperback after the completion of his academic career. Imad Afdam has been awarded the title of the First Moroccan to ever publish verse in English language.
Imad has participated with a Short Stage Play called 'The Forgotten People' during the Opening Gala ceremony of Arabfest, organized by Kulturka, UWB in Pilsen, Czech Republic to rave reviews. Attendees were diplomats, ambassadors, socialites and University scholars.
On mid-September 2018, Imad Afdam launched his first YouTube Channel '3imad'

I loved this poetry of yours dear congratulations on the publication and more of it.

You have subscribed to alerts for Imad Afdam.

You have been added to Imad Afdam's favorite list.

You can also sign-up to receive email notifications whenever Imad Afdam releases a new book.