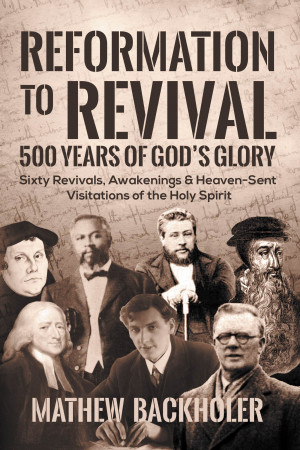 Walk with George Fox during the Quaker Revival in Puritan England and into America; rejoice with Count Zinzendorf of the Moravian Revival and the great mission advance, and see America and Britain transformed under the preaching of Jonathan Edwards, John Wesley, George Whitefield and friends during the Great Awakenings. Discover the depths of the great 1859 Revivals; labour with Jonathan Goforth of China, in Korea and Manchuria and see Wales transformed under the power of the Holy Spirit because of the faith of Evan Roberts. Read about the Pentecostal explosion of the Azusa Street Revival and the great works of God across Britain and America into the twenty-first century.

Mathew Backholer is the co-founder of ByFaith Media (www.ByFaith.org) and films and presents ByFaith TV which airs on numerous Christian networks around the world. As a revival historian he collates, documents and records revivals from around the globe. He is the author of a number of books including: Global Revival, Revival Fire, Revival Answers, Short-Term Missions and Extreme Faith.

You have subscribed to alerts for Mathew Backholer.