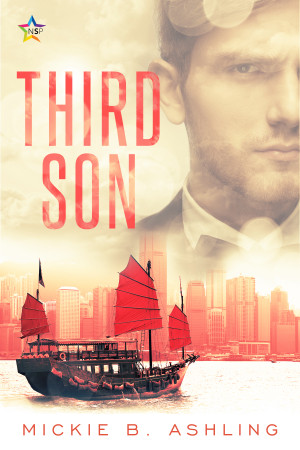 By Mickie B Ashling
Adult

Coming home seemed like a great idea until it wasn’t. Niall finds himself a stranger in a familiar landscape, slammed on multiple fronts by broken promises, jealousy, intrigue, unimaginable deceit, and undercurrents of evil. As his dreams quickly turn into nightmares, Niall reaches out to new allies for support. More
American Niall Monroe returns to Hong Kong—a city he calls home—after being away for eight years. He hopes to finally find happiness with Peter Wei, his closeted lover of fourteen years, but is disappointed to find Peter has been put in an untenable position. He must marry and produce the long-awaited grandchild or get cut off by his millionaire father.

Gerard Sun, a talented artist, bursts back into Niall’s life after a one-night stand in Las Vegas. Circumstances force the men to deal with their attraction, especially when Niall’s firm considers Gerard to help promote tourism in the People’s Republic of China.

Mickie B. Ashling is the pseudonym of a multifaceted woman who is a product of her upbringing in multiple cultures, having lived in Japan, the Philippines, Spain, and the Middle East. Fluent in three languages, she’s a citizen of the world and an interesting mixture of East and West. A little bit of this and a lot of that have brought a unique touch to her literary voice she could never learn from textbooks.

By the time Mickie discovered her talent for writing, real life got in the way, and the business of raising four sons took priority. With the advent of e-publishing—and the inevitable emptying nest—dreams of becoming a published writer were resurrected and she’s never looked back.

She stumbled into the world of men who love men in 2002 and continues to draw inspiration from their ongoing struggle to find equality and happiness in this oftentimes skewed and intolerant world. Her award-winning novels have been called “gut wrenching, daring, and thought provoking.” She admits to being an angst queen and making her men work damn hard for their happy endings.

Learn more about Mickie B Ashling

Reviews of Third Son by Mickie B Ashling

You have subscribed to alerts for Mickie B Ashling.

You have been added to Mickie B Ashling's favorite list.

You can also sign-up to receive email notifications whenever Mickie B Ashling releases a new book.