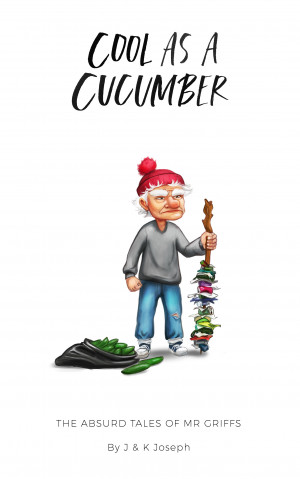 Cool as a Cucumber

By Keren Joseph
& Jonathan Joseph
Cool as a Cucumber is the second story in The Absurd Tales of Mr Griffs series. When there's a cockroach outbreak in the town of Cornville, Mr Griffs' cucumber patch is suddenly at the centre of everything. When word spreads that cucumbers can be use as an alternative remedy, Mr Griffs is comforted by an angry mob led by his neighbour and arch-nemesis, Steve Moran. More
When there’s a cockroach outbreak in the town of Cornville, only one man is as cool as a cucumber.

Mr Griffs isn’t at all fazed by the cockroaches – not when he has a garden full of cucumbers. When news of his alternative remedy gets out, Mr Griffs is faced with an angry mob. Led by Steve Moran, Mr Griffs’ arch nemesis, the cucumber thieves will stop at nothing to get what they want. Mr Griffs is forced to put aside his scientific research on wild bush turkeys and must do whatever is necessary to protect his flowerbeds, his garden, his house and his friends. Even if it means teaching Steve a lesson or two and setting the local council straight.

‘Yes, the rumours are true. I do have home grown cucumbers and their skins deter cockroaches. They’re also quite delicious, if I do say so myself. You can pickle them, put them in salads or even just eat them whole.’
Download: epub
Price: Free! USD
Add to Library
Create Widget
Tags: fiction humor young adult free children book free book children series children tales children kids
About Keren Joseph

Jonathan and Keren Joseph are a brother and sister team from Sydney, Australia. They are the authors of The Absurd Tales of Mr Griffs - a series of short stories.

About the Series: The Absurd Tales of Mr Griffs

The Absurd Tales of Mr Griffs is a series of short stories.

Rather than being heavy on morals, the series exaggerates reality and is whimsical and quirky. It’s all about the irony of life because, let’s face it, it’s more fun this way.

Mr Griffs, as a character is extremely logical, though he tends to think outside the box. And yet, somehow, his approach to life always seems to get him into trouble. Whether Mr Griffs is creating his own line of tea blends, chasing wild bush turkeys off his property or getting revenge on his pretentious neighbor, the stories will keep you entertained.

There is no predicting what Mr Griffs will do next.

Also in Series: The Absurd Tales of Mr Griffs

You have subscribed to alerts for Keren Joseph.

You have been added to Keren Joseph's favorite list.

You can also sign-up to receive email notifications whenever Keren Joseph releases a new book.