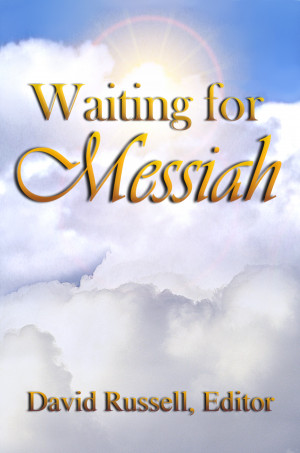 By David Russell
Rated 4.50/5 based on 2 reviews
Discover the Messiah in a different way with this collection of stories about Christ from a Messianic Jew point of view.

"Nourish us with sacred story till we claim it as our own." In our church we often sing these words, which are part of the hymn "As We Gather at your Table." I believe the book WAITING FOR MESSIAH edited by David Russell can be a helpful resource in this regard. It's a collection of stories about Christ from a Messianic Jewish point of view.

The stories, written by several authors including Russell himself, are based on imagining the lives of known Bible figures who waited for Messiah. They reflect the heart cry that, in the words of Russell, "continues down the centuries from ancient Yisrael to modern Indiana and everywhere in between."

The word list near the beginning of the book is useful for people who, like myself, aren't terribly familiar with Hebrew. It includes terms such as Adonai (Lord God), Avraham Avinu (Abraham our father), Berakhah (Blessing), and Tehillim (Psalms).

The book contains eleven stories. These stood out for me:

-"A Mother's Tale" by Karen Hopkins. Scenes from the life of Miryam, mother of Yeshua. When taunted for getting pregnant before marriage, she says, "Every baby is a blessing... And this baby is a very special blessing."

-"One Glorious Night" by Ronnie Dauber. A young shepherd recounts the birth of "the ultimate lamb."

-"Free at Last" by Ugonmaeze Akandu. When the elderly Simeon meets the Holy Family in the temple, He realizes that God has kept His promise and will finally let His servant go in peace.

-"Yeshua the Rabbi" by David Russell. In Yeshua's hometown, Natzeret, many people reject him. The narrator of the story isn't sure what to think. He says, "We've got other possible messiahs running around, but Yeshua, there's something about him the others cannot claim to possess."

-"In Full Unity" by Donna B. Comeau. A woman weaves a seamless garment with no idea of who will wear it. She worries that she's acting foolishly. When she meets Yeshua, she knows that God led her to weave it for Him. I like this story's specific details about the woman's living conditions, for example, "Her roof had a beam that ran from wall to wall, and atop was a healthy crop of grass, barley, and the dying beginnings of a fig tree that wouldn't survive the summer's heat."

-"Redemption of a Thief" by Glenda Reynolds. A thief who murders a young man sees Yeshua raise him from the dead. The miracle impresses the thief, who says "I carried on with my life of crime, but I was not the same thief after that day." Eventually he is sentenced to death for his many crimes. As he hangs on his cross beside Yeshua, he says, "Remember me when you come into your kingdom." Yeshua's answer: “Truly, I say to you, today you will be with Me in paradise.”

Brief notes after each story tell something about the author and where he or she may be reached. I think the book would be a good read for both adults and young adults.

(reviewed the day of purchase)
Glenda Reynolds reviewed on Sep. 18, 2017

This ebook was a great concept from the start; it is filled with heartfelt stories 1st century Israel point of view. These stories will administer to your inner spirit, a testimony of God's goodness and greatness. Two thumbs up to the contributors that shared the vision to recreate a time in our history and weave them together. ~ Glenda Reynolds (contributor & illustrator)

You have subscribed to alerts for David Russell.

You have been added to David Russell's favorite list.

You can also sign-up to receive email notifications whenever David Russell releases a new book.