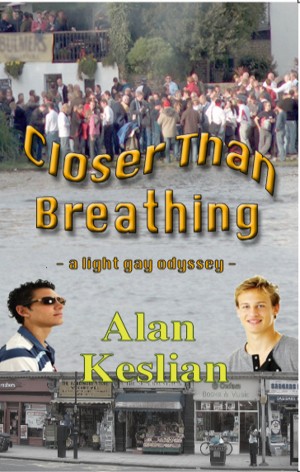 Making use of opportunities along the way to achieve success, he ghost writes a rock star’s autobiography, and finds true love with a level headed and down to earth boyfriend. Together they deal with life’s distractions, enticements and challenges. Whilst the ‘straight’ world around them becomes ever more weird and out of control, the couple are determined to be true to themselves and each other.

I was a Gay Liberation Front activist in London in the 1970s, among other things setting up West London GLF and organising gay dances attended by hundreds in Fulham Town Hall.
I have experienced and benefited from the huge change in attitudes towards Gay men and Lesbians in England and elsewhere during recent decades. During my teenage years, in the UK any sex between men was a crime, whereas now civil partnership offers a legal status on a par with marriage, and discrimination on grounds of sexual orientation is increasingly outlawed. This transformation has huge implications for gay relationships, and my motive in writing is to explore the impact of this new freedom and portray its effects. My first novel, Goodmans Hotel, was published in 2003. My second, a more humorous book, Closer Than Breathing - A Light Gay Odyssey - came out in 2009. I believe my readers’ time is valuable, and try hard not to waste it.
I live with my partner in West London, and am a member of GALHA, the UK based Gay and Lesbian Humanist Association.

You have subscribed to alerts for Alan Keslian.

You have been added to Alan Keslian's favorite list.

You can also sign-up to receive email notifications whenever Alan Keslian releases a new book.