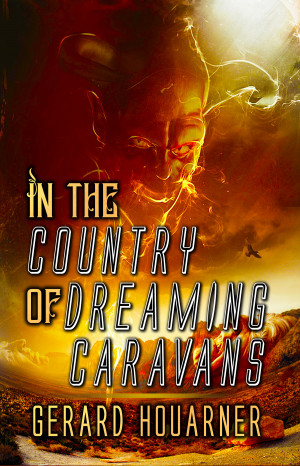 In the Country of Dreaming Caravans

By Gerard Houarner
A little girl who plays with ghosts and spirits is lost in the desert. No family, no friends, just memories of an old life in a world of cities and cars, and a head full of visions and dreams that don’t belong in the world. She likes to tell stories. She wonders what she is worth to the living who sell her, buy and steal her, to the spirits and ghosts and djinn and ghuls she plays with. More
"Houarner, always a maestro of the “smart” horror tale, further hones his art in this scary provocative nod to The Thousand and One Nights and other ancient traditions of phantasmal story-telling. Chock full the macabre and populated by the arabesque horrors of a culture far older than ours, this great new work by Houarner is a Must Read for all venturers into weird fiction.”
— Edward Lee, author of White Trash Gothic and City Infernal

Once and now, a little girl who plays with ghosts and spirits is lost in the desert…

No family, no friends, just memories of an old life in a world of cities and cars, and a head full of visions and dreams that don’t belong in the world.

She likes to tell stories.

She stinks of camel.

Many times, she wonders what she is worth to the living who sell her, buy and steal her, to the spirits and ghosts and djinn and ghuls she plays with, to the Caravan of the Dead she comes to belong to, to the dead who wake her and are awakened by her.

Once and now, she wonders what others are willing to pay for her stories…

“A redemptive story of the saving magic of story itself. Lose yourself, and find yourself, in the tale of Aini, a virgin storyteller cast adrift by selfish parents to the whims of the desert to make her way in the world…maybe all the way to the Caravan of Dreams. In this short novel, Houarner has crafted a fantastic, beautifully dark journey to the center of the secret heart!”
— John Everson, Bram Stoker Award-winning author of Covenant and NightWhere

Gerard Houarner fell to Earth in the fifties and is a product of the NYC school system and the City College of New York, where he studied writing under Joseph Heller and Joel Oppenheimer and crashed hallucinogenic William Burroughs seminars back in the day. He went on to earn a couple of Masters degrees in psychology from Columbia University so he could earn a living. He’s worked in Hells Kitchen, on the Lower East Side at the beginning of the AIDS epidemic, and in the Bronx at the start of the crack epidemic before settling into a quiet, contemplative and genteel career as an uncivil servant at a state psychiatric center. Married in a New Orleans Voodoo Temple, he and his wife, writer and poet Linda Addison, reside in a house decorated in Nouveau African Native French Goth Tribal Fantastic atop a hill in the Bronx.

His publishing career includes three novels The Bard of Sorcery, The Beast That Was Max, Road to Hell and over 240 short stories published in a variety of magazines and anthologies including Cemetery Dance, Weird Tales, Midnight Premiere, Brutarian, City Slab, Flesh and Blood, Deathrealm, Borderlands, Damned: An Anthology of the Lost; Mojo: Conjure Stories;Dark Acts, and others.

Story collections include Painfreak, I Love You And There Is Nothing You Can Do About It, Black Orchids from Aum, and Visions Through a Shattered Lens.

He has also edited or co-edited three anthologies: Going Postal, Dead Cats Bouncing and Dead Cat's Traveling Circus of Wonders and Miracle Medicine Show (both with the artist GAK). In addition, he serves as Fiction Editor for Space and Time magazine.

People seem to talk most often about his continuing character, Max, a supernaturally endowed assassin, as well as Dead Cat—a series of collaborations with the artist GAK about, like, you know…a dead cat.

Fifty-plus years into life, he has come to believe he is the kind of person who wandered away from the village at a tender age, spent too much time in the wilderness, and these days is allowed to return only on ceremonial occasions or to scare the little children. He also believes, on cold and rainy days, that his purpose in life is to serve as an example for others, much like the crucified humans at the edge of the desert in the original Planet of the Apes, or rebel gladiator slaves along the Via Appia. On better days, he sees himself standing at the crossroads of the psychological and the supernatural; the real and the surreal; the past, present and future; waiting for some thing to come along, take his soul and leave him with the voice to tell anybody who will listen the story of how it all happened.

He continues to write whenever he can, mostly at night, about the dark.

You have subscribed to alerts for Gerard Houarner.

You have been added to Gerard Houarner's favorite list.

You can also sign-up to receive email notifications whenever Gerard Houarner releases a new book.