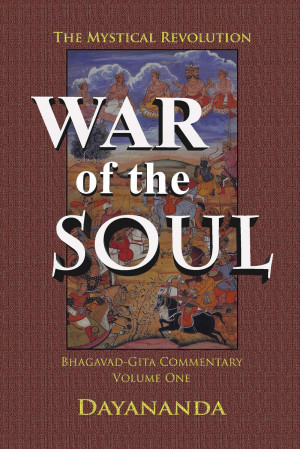 War of the Soul

By Dayananda
War of the Soul is a guide to cultural revolution.

It's a commentary on the ancient Bhagavad Gita made relevant to modern society. More
War of the Soul incites revolution.

War of the Soul is a roadmap that guides society to true success.

It illuminates Bhagavat culture, which unfolded naturally from the ancient Indo-European culture.

How can the earth continue to tolerate societies that don’t revere nature? War of the Soul champions social reform on behalf of nature.

“War of the Soul is audacious, eloquent, and wise, in that order,” says a reviewer.

In 1967, after three years in the Marines, I became a disciple of Prabhupad, the leader of the Hare Krishna movement. And I felt that I had joined a revolution. I decided that the movement was, if successful, going to significantly change American culture.

War of the Soul contributes to that cultural revolution by presenting Bhagavat socialism through Krishna's Gita.

From 1967 to 1970, I was one of the senior leaders of Prabhupad’s organization, and then he transitioned me into a middle management role.

For the next four decades, I continued to serve actively in his organization until my retirement. In addition to managing several of Prabhupad’s temples, I also pursued a moderately successful career in information systems.

Scattered throughout the 1970s and 1980s, I spent a few years studying Sanskrit, Bengali, Hindi, Farsi, and the history of the Bhagavat culture in India.

I welcome queries and feedback at dayananda@msn.com.

You have subscribed to alerts for Dayananda.

You can also sign-up to receive email notifications whenever Dayananda releases a new book.