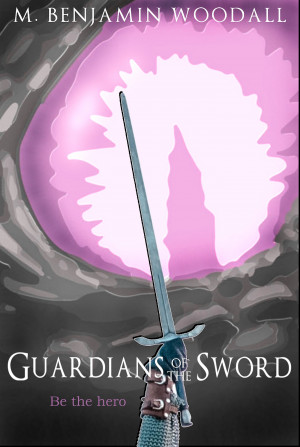 Guardians of the Sword

By M. Benjamin Woodall
Imagine becoming a part of Arthurian legend as you follow John's crusade to discover Arthur's legendary sword in Book II of Raiders of the Dawn. More
The fight for Angoll continues, told from Jehoobud's viewpoint, as he, John, and Kalla enter the Swamps of Mist. Hidden within these desolate wastes lies the lands of the Kretan Rahnat, descendants of the original Raiders from Earth. Here, our three adventurers find an ally in the young, warrior queen of the Kretan Rahnat, Dayona, who joins them in a clash against Gargoyles' swords and a wizard's dark spell on a quest for the legendary Sword of Truth

Price: $0.99
Free! USD
Buy with coupon Use the code SS100 at checkout to get this book for free during our site-wide promotion!
(Offer good through July 31, 2020 )
Have a better coupon?
Add to cart, then apply your coupon
Add to Library Give as a Gift
How gifting works
Create Widget
Tags: sword arthurian magical realms gargoyles sword sorcery enchanter magical world knight romance knight fantasy sword quest
About M. Benjamin Woodall

M. Benjamin Woodall was born in Fort Lauderdale, Florida in 1972 and has held residence in ten states in eastern/central United States. He studied various disciplines including filmmaking at Columbia College Chicago (IL), and has worked in the independent film industry in the 1990s to 2000s as screenwriter/producer. Mister Woodall is the author of Raiders of the Dawn, a young adult fantasy series, Archives of the Witch, and other works.

About the Series: Raiders of the Dawn

The saga of the world of Angoll, its connection to Earth through the King Arthur mythos, and the fight for freedom from the oppression of the dragon Morgana.

Also in Series: Raiders of the Dawn

You have subscribed to alerts for M. Benjamin Woodall.

You have been added to M. Benjamin Woodall's favorite list.

You can also sign-up to receive email notifications whenever M. Benjamin Woodall releases a new book.