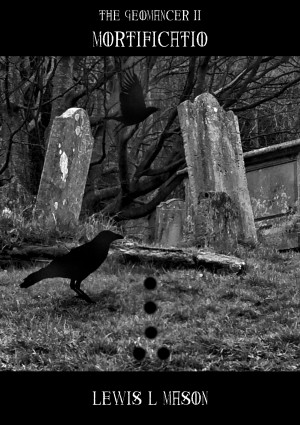 The Geomancer II: Mortificatio is the second book in the Occult Noir series by Lewis L Mason. Set in contemporary London, this thrilling and disturbing story of a vocal atheist's battle against the evil forces unleashed by his enemies blends elements of gritty realism, wry urbanity, neo-noir intrigue and occult horror. More
'Without warning, she just appears. Sometimes as a shadow. Sometimes like a... thing made of flesh. Staring. Waiting. My mother. Lain cold in the ground these twenty years...'

Michael Evans began a personal crusade against religion and superstition, using his radio show Finding Faith as a tool to attack and bring down his latest target - the post-modern super-guru Krishnaraj. But in doing so, Michael has fallen down a very deep rabbit hole... one leading him into the foul underbelly of organised crime, political subterfuge, and the evils of malefic occultism. And the deeper he falls, the more people around him seem to die... The Black Lodge of the Faceless are at work - a vipers' den of concealed wickedness, led by the ruthless Pater Nija. And they have been given unspeakable power over the Elements – through the bestowal of the Black Dispensation. Howling Empusae hunt in the streets. The spectral Watchers stalk the shadows. The distorted corpse Pales rise to set upon the living. The waters stir with the unholy presence of Those Whose Hair Gathers Filth. And while the people of South London see their world going to hell, Michael cowers in his cupboard, hiding from his mother... his long-dead mother...

Lewis L Mason writes Occult Noir, a term he coined to more accurately reflect the dark menacing quality of his stories. He also writes Cambrian Noir, supernatural horror and weird thrillers.
His life-long fascination with the occult began when as a child he got lost in a Romany funfair, and ever since that night his path has led him into dark and unseen worlds. Mason's solitary footprints can be found in the dust of Masonic halls, the damp turf of ancient graveyards and the shrouded peaks of Cambrian hills.
Occasional socialite, scholar and mystical consultant Mason is known by many names to many people. He has broken his long silence to present these tales of mystery and terror to entertain and enthral the discerning reader. But Mason's stories are more than fiction - subtle and secret truths are purposefully concealed therein.
"Was helfen Fackeln, Licht oder Briln so die leut nicht sehen woellen?"
- Heinrich Khunrath
Lewis L Mason has occassionally been seen by night in west-central Paris, the Palatine Hill in Rome, beside the Roman Wall of London, and by the sea in Sussex.

You have subscribed to alerts for Lewis L Mason.

You have been added to Lewis L Mason's favorite list.

You can also sign-up to receive email notifications whenever Lewis L Mason releases a new book.