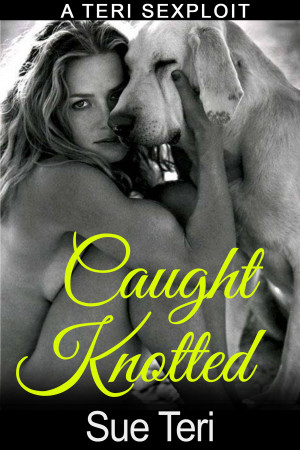 Teri needed to find a place since her roommate’s boyfriend was moving in. Teri found an older gentleman who lived out in the country with his dog. Teri was very interested. The deal was reached and Teri moved in the next day. Two weeks after moving in, Teri was “introduced” by accident to Henry’s dog, which started a chain of events that was most pleasurable for all three of them. More
A young lady working in a small retail job, trying to make ends meet. When she started her job, one of her coworkers said that she was looking for a roommate and ask if Teri was interested. Teri could not afford a place of her own so she took her co-workers offer. Her co-worker was nice and all but she started bringing her boyfriend over to the apartment, which made it uncomfortable for Teri.

After about six months, Teri’s roommate told her that her boyfriend was moving in full time and that Teri would need to find another place to live. So, Teri started searching the ads in the paper, hoping to find a place that would fit her budget. A couple weeks went by without any luck and Teri’s roommate was getting impatient.
Finally, Teri found an ad from an older gentleman who lived out in the country but not too far from her work. The rent was hundreds of dollars cheaper than any other place she called. She called the owner and set up a meeting with him for the next day.

Not wanting to seem desperate but also desperately needing a place to stay, Teri dressed conservatively but also a little sexy. She was hoping that the man would like her enough, even if it was only for her looks, to offer the room.

Upon reaching the address, she found the house was small but cozy looking and sat on about a half-acre of land. There were no immediate houses around so it looked ideal for the quietness and privacy she was looking for.

The man who greeted her looked like he was probably in his mid-60s, with a strong body, like he worked in the fields. A beautiful male dog was standing by his side and seemed very friendly. After inducing herself, they sat down and talked. He said he was retired and he spent most of his days out playing golf and doing other things with his friends. He told her that for the reduced rent, he was looking for someone to clean and maintain the house.

Teri was very interested and stated so to him. The deal was reached and Teri moved in the next day. Two weeks after moving in, Teri was “introduced” by accident to Henry’s dog, which started a chain of events that was most pleasurable for all three of them.
Available ebook formats: epub mobi pdf lrf pdb txt html
First 20% Sample: epub mobi (Kindle) lrf more Online Reader
pdb
Price: $0.99 USD
Buy Add to Library Give as a Gift
How gifting works
Create Widget
Tags: fellatio doggy style consensual sex mature sex vaginal sex knotted bestilaity ora sex
About Sue Teri

You have subscribed to Smashwords Alerts new release notifications for Sue Teri.