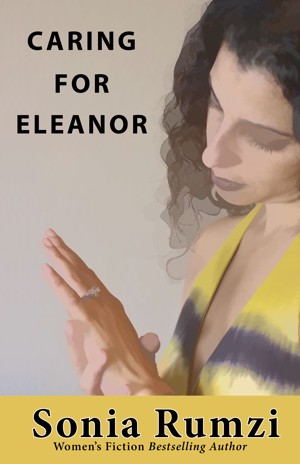 Caring For Eleanor: A Novel

By Sonia Rumzi
Rated 5.00/5 based on 2 reviews
Is it true that if we are abused, we turn around and abuse others? Not always. A story of courage, caring and starting over. Courage to face life, caring for others in the process and beginning again when all seems lost.

This is an amazing story of a woman who is strong deep inside, but who has been taught to act weak. Sadly it’s a story of many women all over the world. So many children are growing up in abusive families, just to pass on into abusive relationships.

‘Caring for Eleanor’ is an important book that should be in everyone’s collection. It reminds the reader that, while being patient, tolerant and kind toward the world, a person should not forget to exercise those qualities toward him/herself.

Pushed toward the brink, Salma was strong enough to pick herself up and face the upcoming struggle for freedom. Taught to think of herself as unwise and unworthy from the early childhood, she finally raises her head and faces the real Salma.
Her story unfolds with such serenity, such humanity, such understanding of people and their strengths and shortcomings. This novel is difficult to put down and it touches you to the marrow. Toward the middle of the novel I felt as if I'd known Salma for years, frustrated by my own inability to catch a good talk with her, to shake her off the blindness at her situation.

A wonderful read that I would recommend to anyone, regardless of age or gender!!!

I found this a truly amazing story that Miss Rumzi has brought to us. A breath taking story of survival, forgiveness, endurance an the healing of ones soul.

This story will draw you in to the life of a young woman who has been so put down that she can not see the beautiful caring and loving person that she is.

She gives us a look into the world of Salma who has been put down since childhood and now in marriage. A women who has lost all self esteem, that she thinks she can not take care of herself and daughters . Her husband has made feel that she is nothing without him.

She meets Eleanor who becomes not just a person she takes care of but a person who become someone that gives
her the strength she need to see the true person she really is.

I found this book hard to put down. It shows us just because a person has been abused. It does not mean that they will be abusers themselves.
I would highly recommend this book.

You have subscribed to alerts for Sonia Rumzi.

You have been added to Sonia Rumzi's favorite list.

You can also sign-up to receive email notifications whenever Sonia Rumzi releases a new book.