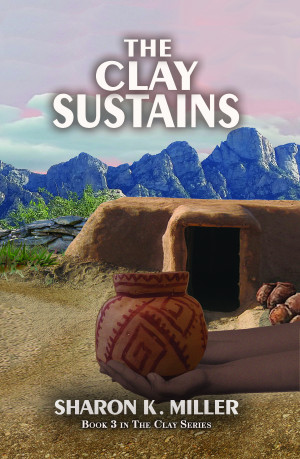 The Clay Sustains: Book 3 in The Clay Series

By Sharon Miller
When she marries the man her father chose for her, she learns the shaman in her new village is a man who had previously terrorized her. Because he is determined to control her and the village, she must learn to use her power by calling on the raven, her spirit, to resist. With the lives of her family and the future of the village at stake, she must confront his magic, but at what cost? More
In a small village beneath the massive towers of Great-Grandfather Mountain, Ha-wani, following the traditions handed down since before remembering, crafts an ordinary pot, singing her spirit into the clay as she works it. It is a simple act, but one that will touch the lives of other women centuries after she has gone from this place.

Like the women in The Clay Remembers and The Clay Endures, Ha-wani doesn’t know how strong she is until she is put to the test. When she marries the man her father chose for her, she discovers the shaman in her new village is the same man who had terrorized her, promising that she and her powerful spirit would belong to him. Because he is determined, not only to have her, but to control the village, she must learn to use her power by calling on the raven, her spirit, to resist his attacks. With the lives of her family and the future of the village at stake, she must confront his magic, but at what cost?
Available ebook formats: epub
Price: $2.99 USD
Buy Add to Library Give as a Gift
How gifting works
Create Widget
Tags: spirituality womens fiction archaeology cultural heritage hohokam strong women characters prehistorical fiction
About Sharon Miller

Reviews of The Clay Sustains: Book 3 in The Clay Series by Sharon Miller

You have subscribed to Smashwords Alerts new release notifications for Sharon Miller.