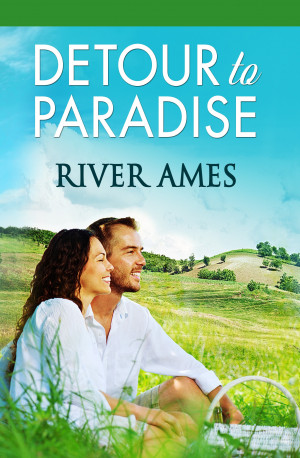 Her initial impression of him is clearly wrong. For some reason, known to the reader but unknown to him, Sarah mistakenly believes that Lucas Rockworth is a shy, sensitive man. After having to deal a lifetime with a dominating older brother and controlling father, she finds these traits very appealing.

Her recent breakup with someone who could best be described as a bully has Sarah longing for a kinder, gentler man in her life.

Lucas tells himself that, since he makes his living as a general contractor, he has the hands-on experience to make himself into anything Miss Sarah Burke is looking for.

It shouldn’t be that great a stretch to become a modern, sensitive kind of guy, should it? She wants Mr. Rogers… Well, darn, he can manage that for the short time he’s in Idaho.

How hard can it be to tame his darker, more cynical side?

As for Sarah Burke? She thinks she’s met a real life version of Mr. Rogers. But, the reader knows its Rambo who’s come a’courting.

River Ames spent the first eighteen years of her life in Southern California. Here is a partial list of some of the cities in which she lived: Pasadena, South Pasadena, Duarte, El Monte, Arcadia La Puente, Lomita, West Covina, Pacifica, Santa Monica, Palm Dale, and Hacienda Heights.
In some of those cities, she lived at six different addresses.

In the city of La Puente, River’s family lived in four different houses on the same street.

The non-glamorous reason for all the moves was habitual eviction necessitated for non-payment of rent.

It was an interesting way to grow up.

Perhaps, because she was so frequently identified as the “new girl,” the pattern of River being an observer instead of a participant in the interactions going on around her seemed a logical fit for her personality.

When she was thirteen, River read “Gone with the Wind.” She skipped three days of school in order to finish the book in one sitting. Disappointed in Rhett for “not giving a damn,” River wrote her own sequel—in long hand, on three-hole punch, notebook paper. The opening line? “Tomorrow dawned bright and fair.” In less than fifty pages, Scarlett had been transformed into Jane Eyre and Rhett had fallen in love with her all over again.

After Southern California, River has spent the next part of her life living in the semi-rural town of Idaho Falls, Idaho. She is a graduate of Idaho State University, majoring in Health Education Sciences and Addiction Counseling. She’s worked the past ten years at a Behavioral Health Center where she assisted children, teenagers, and adults committed in a 24/7 secured facility because of mental health challenges they are experiencing.

River’s books celebrate the good-natured humor that lays at the heart of most of our human predicaments. The conflicts are significant, yet it is her characters and their quirky (yet somehow universally relatable) thoughts, words, and choices that reflect a light-hearted peek into a world we wish was real.

The amazing thing is that these worlds are real to readers for the time they visit there.

Readers have said: “In a River Ames book, one minute I’m laughing out loud, and the next I have a lump in my throat.”

River is currently readying a historical novel, “Gideon’s Justice.” This three-part novel is Book I in a three volume western series set in the Colorado Territory. Its scheduled release is for Fall, 2017.

“Gideon’s Justice” is the first of a three-book series about a group of men known as the “Guardsmen” and takes place in the Colorado Territory.

The western Trilogy features the noble “Guardsmen” who serve as protectors for Denver and its outlying areas. “Youngblood’s Rules,” Book II in the series is also available for pre-ordering. It’s scheduled for release in October, 2017. “McKenzie’s Justice,” Book Three in the series may also be pre-ordered. Its scheduled release is December, 2017
You may contact River Ames at www.riverames.com

You have subscribed to alerts for River Ames.

You have been added to River Ames's favorite list.

You can also sign-up to receive email notifications whenever River Ames releases a new book.