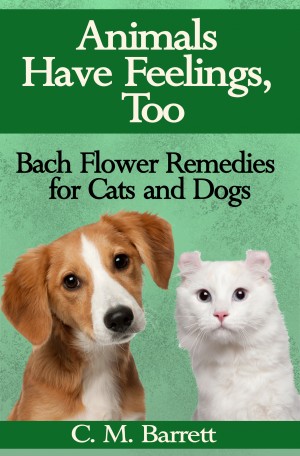 Animals Have Feelings, Too: Bach Flower Remedies for Cats and Dogs

How the Bach Flower Remedies Can Help Animals and Humans: An explanation of how energy healing works.

Understanding Our Animal Companions: Animals, especially companion animals have emotions. Because they don't speak the same language as we do, they often communicate through their behavior. Learn to crack the code by observing your pet carefully.

My Cat/My Dog/Myself: Sometimes animals mirror our own emotional upsets. You'd be surprised what you can learn about yourself from them.

Abuse and Abandonment: These animals need special understanding and treatment.

Some Common Conditions and Remedies for Them: An annotated list.

Reviews of Animals Have Feelings, Too: Bach Flower Remedies for Cats and Dogs by C. M. Barrett