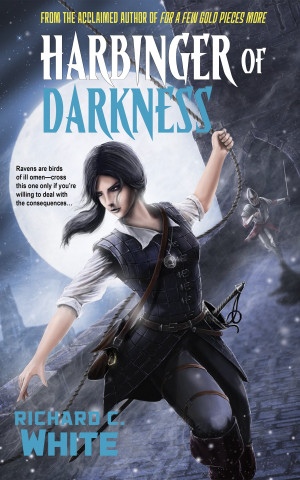 By Richard C. White
Perrin is the intelligent, strong-willed daughter of a bookseller. Raven is her secret alter ego: an accomplished thief who, when the chance comes to tweak both king and church, finds the temptation too much to resist. By stealing a mystical gem—which unbeknownst to her is the lynchpin for the king’s upcoming military campaign—both of her worlds are upended by a conspiracy against the throne. More
Raven is the night. Perrin, the day.

One is an accomplished thief, and an enigma. Never seen in the light of day, no one is quite sure where she goes or where she hides the bounty of her crimes. The other is a bookseller’s daughter, trapped by expectations and circumstances but with dreams of exploring the lands she’s only read about. And both share a great secret:

That Perrin and Raven are the same person.

A magic pendant allows Perrin to disguise herself, keeping her other life as Raven hidden from everyone, even her closest allies. But after the theft of a mystical gem, which unbeknownst to her is the lynchpin for a cruel king’s upcoming military campaign, both of her worlds are upended, with potentially fatal consequences for friends, family . . . and Perrin herself.

With bounty hunters and the king’s personal assassins pursuing her darker half, Perrin is swept into a conspiracy against the throne she despises. Add in the complication of an apprentice thief she never wanted to train, and the odds of Perrin living long enough to pursue her dreams are steadily shrinking . . .

Richard C. White is the author of the nonfiction writers' reference book, Terra Incognito: A Guide to Building the Worlds of Your Imagination; the novels Gauntlet: Dark Legacy: Paths of Evil and Star Trek: SCE: Echoes of Coventry; the fantasy comic book The Chronicles of the Sea Dragon Special; and the graphic novel Troubleshooters, Inc.: Night Stalkings. His short fiction has appeared in such anthologies as The Ultimate Hulk, Star Trek: Corps of Engineers: What’s Past, Star Trek: The Next Generation: The Sky’s the Limit, and Doctor Who: Short Trips: The Quality of Leadership.

You have subscribed to alerts for Richard C. White.

You have been added to Richard C. White's favorite list.

You can also sign-up to receive email notifications whenever Richard C. White releases a new book.