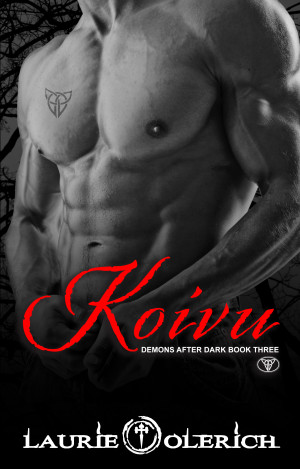 Former Hell’s Fury champion, Koivu, is desperate to reclaim his title. Exile in a broken human body is his worst nightmare until he meets a sexy, soft-hearted physical therapist who heals much more than his shoulder. PT Micki Glass can't resist the man behind the feral eyes until her world crashes to the ground. Can she love him for the man he is now and forget the demon he once was? More
This Band of Brothers Will Steal Your heart!

Introducing the Demons after Dark series! It’s hot paranormal romance featuring unlikely alpha heroes who will make you laugh, cry, and swoon. Known as Trinity demons, this band of brothers was stripped of their powers and violently exiled from Hell. Forced to live as humans, they’re left with no power and no weapons while a secret society quietly plots Lucifer’s demise. For these big, bad demons, adjusting to life as a human is, well, harder than Hell!

Reigning Hell’s Fury champion, Koivu, is desperate to return to Hell to reclaim his title and resume his stolen life. Worshiped and adored as an extreme athlete, he had glory and more females than he probably deserved. He was a freakin’ rock star! Being exiled inside a broken human body is his worst nightmare. His odds of surviving his new life take a sharp downturn when the Trinity discover a plan to sacrifice them for the coming revolution. His future looks bleak until he meets a sexy, soft-hearted physical therapist who heals much more than his shoulder. Can he really walk away from the one woman who loves him for who he is and not for his titles?

Physical therapist Micki Glass knows something about damaged people. She’s been struggling to get over her ex for three long years when this crazy man crashes into her life. He’s crude and intense but irresistibly charming. With his feral eyes and sexy smile, Koivu takes her on a sensual joyride that makes her feel like a woman again. As their affair heats up, she craves him like oxygen until she discovers what he really is. With more than her heart on the line, can she accept his past and love him for who he is now?

The day of reckoning is looming closer and the sacrifices have begun. Can Koivu stop the murders, find the rest of the Trinity, and convince the woman he loves to give him another chance?

Warning: This story contains intensely hot sex, an irresistibly-damaged hero, and a damsel with a steel backbone. Have a box of tissues handy. The author takes no responsibility for missed work or grouchiness from lack of sleep.

Laurie Olerich is the author of the Primani and Demons After Dark series. Part romance, part paranormal, part adventure...Three things she can’t live without! Laurie spent most of her life in the Northeastern United States and in Western Europe. She now lives in San Antonio, Texas, with her son and Dalmatian muse Rambo. In an attempt to re-live her wild and crazy younger years, she lives vicariously through her characters by setting their adventures in her favorite city, New York, and the mountain forests of New England as often as possible. Before diving into a writing career, Laurie dedicated 20 years to her country by serving in the United States Air Force. Much of her time was spent around men with guns and cool toys...this explains her obsession with both.

About the Series: Demons After Dark

Introducing Demons after Dark. A Primani World crossover series, it’s hot paranormal romance featuring antiheroes who will make you laugh, cry, and swoon. Known only as Trinity demons, this band of brothers was stripped of their powers and violently exiled from Hell. Wrongly accused of an unthinkable crime, they’re left to survive with no memories and no weapons while a secret society quietly plots Lucifer’s demise.

Also in Series: Demons After Dark

You have subscribed to alerts for Laurie Olerich.

You have been added to Laurie Olerich's favorite list.

You can also sign-up to receive email notifications whenever Laurie Olerich releases a new book.