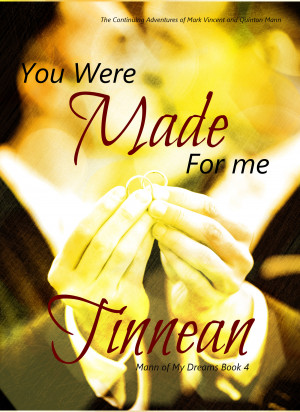 You Were Made for Me

Quinton Mann has resigned from the CIA, but they aren’t happy about that and want him back. To do that, they’ll not only have to convince Quinn that’s a good idea, but Mark Vincent, Portia Mann, and Gregor Novotny as well, and that isn’t going to be easy.
Meanwhile, friends and family need help, and neither Quinn nor Mark will turn them down.
It’s going to be a long year and a half. More
Can things possibly run smoothly when a CIA spook moves in with a WBIS spy? If they’re Quinton Mann and Mark Vincent, they damned well better had.
Quinn, having resigned from the CIA after the debacle of a covert agent being outed, is now living with Mark. Over the next year and a half, they learn to navigate the seas of their relationship together, dealing with a death in the family and Quinn’s new career as a writer, while friends from Mark’s previous life reach out for help and the CIA tries to get Quinn back.
Available ebook formats: epub mobi pdf lrf pdb html
First 15% Sample: epub mobi (Kindle) lrf more Online Reader
pdb
Price: $4.99 USD
Buy Add to Library Give as a Gift
How gifting works
Create Widget
Tags: gay action gay love story gay adult
About Tinnean

About the Series: Mann of My Dreams

Two words describe Mark Vincent of the Washington Bureau of Intelligence and Security: total badass. Quinton Mann, who’s CIA to the core, is considered royalty in the intelligence community. The connection between them should be nothing more than adversarial, since neither agency has any use for the other. In spite of that, Mark and Quinn have found themselves going from adversaries to lovers. In addition, Mark won’t let anyone get to Quinn, while Quinn finds his loyalty shifting to Mark. Now they’re attempting to settle into a relationship that makes both of them happy. However, if it’s not one thing, it’s another, and demands are made on their time by not only those at work, but by friends and family as well. How will the people they care most about react when they learn that not only are Mark and Quinn a couple, but that they’re planning to move in together, and maybe even start a family.

Also in Series: Mann of My Dreams

Reviews of You Were Made for Me by Tinnean