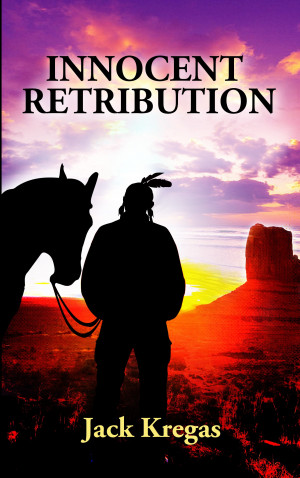 By Jack Kregas
Joey Moretti finds unexpected happiness living with Native Americans. When a horrific event shatters his world, he lashes out in the only way he knows. Is Joey Moretti a kind normal person or is he something much more sinister? Innocent Retribution answers this question. More
The novel Mystical Glasses, tells the story of Joey Moretti as a young man departing New York City in harrowing circumstances and in his fifties becoming an accidental hero after finding the mystical glasses. This interquel fills the gap of the missing years.

This encounter finds Joey as a lost soul wandering aimlessly through the Western United States until a life changing meeting with Coyote, a Native American. It brings changes to his life that rekindles his spirit, bestows him with love, peace, and fulfillment, invigorating Joey to a level he never dreamed possible.

Circumstances bring him in contact with the unscrupulous Alex, a re-connection with the Moretti family’s expanding empire, and an unimaginable event, which combine to deal a blow few men could withstand.

Jack Kregas was born in New England in the north east of the United States. After a stint in the US Army, he was discharged in Europe and the next forty years were spent skiing and living life to the max as well as creating several successful businesses.

Winters in the Alps and summers windsurfing on Maui, Jack departed Switzerland for Maui full time with his Australian wife and small daughter. After five years he moved the family to Australia and became an Australian citizen.

Jack now lives in Brisbane and plays golf and tournament poker. After having published his first book in 2015, an autobiography, It's All About Me and a few others of his adventurous life, he has written another eleven books.

You have subscribed to alerts for Jack Kregas.

You have been added to Jack Kregas's favorite list.

You can also sign-up to receive email notifications whenever Jack Kregas releases a new book.