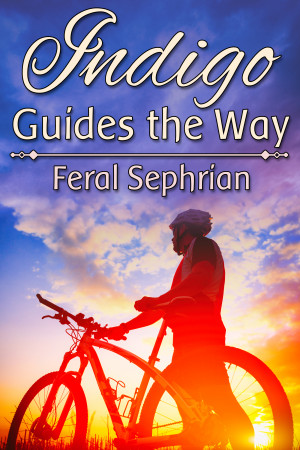 By Feral Sephrian
Rated 4.00/5 based on 1 reviews
Amir’s horoscope says “indigo guides the way” to his happiness. Sounds stupid, but within an hour he meets Jae, a customer at his bike shop whose bike happens to be indigo. Amir observes Jae’s relationship with his boyfriend, Declan, as the two join his cycling group for weekend outings, in hopes of learning from them. Instead he learns why Jae’s bike isn’t the only thing indigo about him. More
Amir has been through so many bad relationships that he finally turns to the horoscopes in his local paper for advice. They claim his happiness is around the corner, but “indigo guides the way.”

Within the hour, a man comes into the bike shop where Amir works with an indigo bike. Amir’s coworker and ex immediately invites Jae, the cute cyclist, to accompany them and their biking group on their next adventure.

Unfortunately, Jae brings along his boyfriend Declan, and Amir wonders if the horoscope meant he could learn from their relationship. At first they seem like a typical couple, but the more Amir pays attention, the more worried he becomes. His fear peaks when he finds out Jae’s bike isn’t the only thing indigo about him ...

I want a group like Pride Ride. They were friends with each other, not overbearing, and they want on group bicycle rides.

You have subscribed to alerts for Feral Sephrian.

You have been added to Feral Sephrian's favorite list.

You can also sign-up to receive email notifications whenever Feral Sephrian releases a new book.