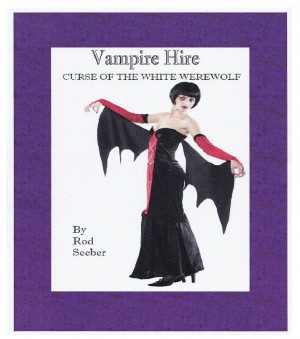 By Rod Seeber
Vampire Hire is a harrowing tale of bloodlust and conflicted emotions! As the black plague decimates the vast populations of Europe the Vampires will not go unscathed! Alongside the mortals their numbers have become dangerously depleted! To Master Valdrek's utter surprise, Aurelia has decided to sacrifice herself in hope of saving her family from the curse of the White Werewolf. Will he help her? More
How could have the faithful Aurelia ever foreseen the significant consequences of such a loving act. As she valiantly offered her pure untainted blood to what was possibly the last of the Master Vampires remaining after the plague? Again, I am compelled to question how could such a simple act, born solely of a pure heart result in the ultimate demise of so many powerful entities of the secretive night world!

Teased and tormented over a number of decades the rare solitary creature that is the white werewolf only desired to reclaim a former mortal existence. Upon a harsh denial of such a simple request from that point onwards all of the aggrieved creature’s remaining days of captivity will embrace the opportunity to strategically plan the waiting downfall of the heartless man who dared to deny the full moon beast. Innocent lives will be lost and ancient tales rewritten as these traumatic times force a change to once everlasting destinies, be it born of mortal bloodlines or born of the darkened world of the night.
Download: epub mobi (Kindle) pdf more Online Reader
lrf pdb txt
Price: Free! USD
Add to Library
Create Widget
Tags: vampire vampire love vampire stories vampire and werewolf vampire horror vampire adventure werewolf stories vampire tales vampire verses werewolf
About Rod Seeber

Well its taken a long while to do these ebooks (Arthritis has slowed me down these days) but I get there in the end, so it's all good. I do not claim to be a great author but I do think I write an interesting storyline so have a gander and grab a sample read. If you happen to enjoy it consider grabbing the whole ebook. My favorite ebook is Bad Taste Tales which comprises ten different Sci Fi Horror based tales of which some can also be purchased separately. The law of averages suggests you will like at least a couple! Another amusing set of tales is Funny Beer Stories and as you may have guessed it involves what happens after you have downed a few! So here's your chance to take the "Pepsi Challenge" and read an ebook instead of looking at something like The Pop Art Van on YouTube or planing your Double Denim for the weekend ... ALSO WORTH NOTING >> All of these stories within offered ebooks are to be written as Screenplays by me. They are of course my original work and therefore copyright. 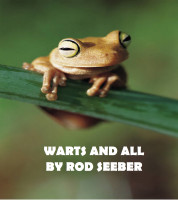 You have subscribed to alerts for Rod Seeber.

You have been added to Rod Seeber's favorite list.

You can also sign-up to receive email notifications whenever Rod Seeber releases a new book.