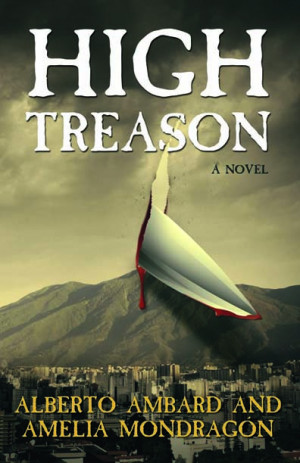 Young, middle class Venezuelans study to get ahead in life in a country blessed with the largest oil reserve in the western hemisphere. Their future looks bright until socialism rears its ugly head. Hugo Chávez rises to the presidency. The once prosperous nation is plunged overnight into a state of famine, crime, and corruption. The streets are plagued with robbery, stabbings, and shootings. Property is seized and given to Chávez supporters. Finally, the small clique of school friends hatch a plot to assassinate the president.

High Treason tells a tale of life in modern Venezuela that resonates everywhere. The impact that one poisonous leader can have on a country should open the eyes of all who vote. Chávez’ twisted ideology turned a free and prosperous nation into a communistic cesspool where no one is safe, and no one has enough to eat except the ruling elite. Ambard and Mondragón are both Venezuelan. They write with voice of authority from the safety of the United States. This is a very important book. It should be read and taken to heart by all who value their way of life. As an added bonus, it’s free.

You have subscribed to alerts for Alberto Ambard.

You have been added to Alberto Ambard's favorite list.

You can also sign-up to receive email notifications whenever Alberto Ambard releases a new book.