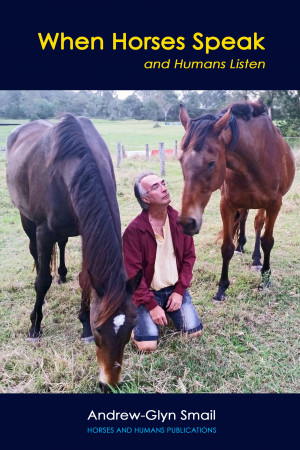 When Horses Speak and Humans Listen

By Andrew-Glyn Smail
When horses speak and we humans choose to listen to them, there is much that we can learn about them and about ourselves. Listening to horses speak has changed my life and taught me much. This book contains a little of what I have learned from horses while listening to them speak. And much of it is startlingly different from what we take for granted. More
In their own unique way horses “speak” and have been “speaking” to humans for centuries, yet most of us have chosen not to “listen” to them. Instead, we humans have insisted on speaking rather than listening, on telling horses what to do or not to, how to do or not do it and when. And we humans have done so not only with our voice but also with an array of metal, leather and plastic devices many of which would not look out of place in a sadomasochistic dungeon or a torture chamber of the Spanish Inquisition.
Over the years I have been a close observer and student of horses, my own and others, in various parts of the world. During the past decade, in particular, horses have been instrumental in fundamentally changing my life and outlook on it. In the course of this process I have written a number of articles reflecting what I have learned from and about horses while listening to them speak. Based on feedback from others also committed to the well-being of the horse, I have edited and reworked them. The resultant articles have acquired a form which will hopefully contribute to our understanding of these magnificent creatures and the capacity they have to help us become more sensitive, caring, nurturing, reliable and dependable friends to them, ourselves, the earth and all to whom it is home.
Available ebook formats: epub mobi pdf lrf pdb txt html
First 10% Sample: epub mobi (Kindle) lrf more Online Reader
pdb
Price: $2.99 USD
Buy Add to Library Give as a Gift
How gifting works
Create Widget
Tags: leadership holistic horse riding trust connection horse training natural horsemanship here and now power of being yielding to pressure
About Andrew-Glyn Smail

It was 2007. I saw a video. The opening scene showed a young man astride a brown gelding moving swiftly along a forest trail at the head of group of grey riderless horses. Downhill and uphill they moved at varying paces. Horse and human put their trust entirely in each other, for they used no tack or tools. The human trusted that his horse would carry him safely. The horse trusted that his human would guide him safely. Their connection was profound. It was not the riding that drew me but the bond between horse and human. It was the most powerful that I had ever seen on various levels. And I knew there and then that I also wanted such a relationship with a horse. So I went in search of it. And I found it.

My books on horses concern my journey since 2007. They include reflections on my experience and what I have learned, including articles written along the way. My final book on horses, Being Humans for Horses, synthesizes all that I have learned.

You have subscribed to alerts for Andrew-Glyn Smail.

You can also sign-up to receive email notifications whenever Andrew-Glyn Smail releases a new book.