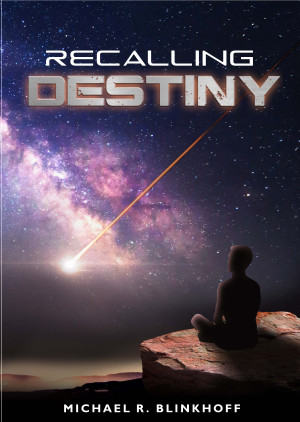 By Michael R Blinkhoff
Recalling Destiny is an adventure, fantasy, action, thriller that contains three parallel story lines. Harrison, Catlin and a third featuring the Destiny facility run by a woman called Ma’am. The story is primarily set in Australia (Sydney, Melbourne, the Outback) but also has scenes in Greece. The story, through its characters, delves in a differing anthropological view of human history, . More
1987, a man is strangely unearthed from a deep pit the central Australian desert, he is alive, but soon thereafter disappears.

Thirty years later that same man walks the street and runs into Harrison, a young kid/hacker trying to unravel the mystery that is Destiny, a secret facility nobody seems to know about. Together with Smith they must work together to unravel what it is, but Smith, it seems, doesn't even know who he is and what he is truly capable of.

Catlin is a young, care-free volunteer who has suddenly become a target of high value. She doesn't know why. but the government have sent soldiers in to capture her, But when she finally flees from their clutches, she's captured by another group, a group who call themselves Destiny.

How do you control your destiny when someone else is pulling the strings?

To look deep within oneself is the only way out.

Michael R. Blinkhoff was born in 1981, Mitcham, Victoria to a Dutch father and English / Irish mother. The fourth child of five, Michaels first few years of life were spent in the suburbs of Melbourne, before his family moved to Papua New Guinea, where they lived for twenty years.
His youth was spent in the land of the unexpected, a youth full of wild experiences, until at the age of twelve he was sent to boarding school in Australia.
He has since lived and travelled all around the world, in Europe, Asia, Africa, America and the Pacific, currently residing in Vietnam.

You have subscribed to alerts for Michael R Blinkhoff.

You have been added to Michael R Blinkhoff's favorite list.

You can also sign-up to receive email notifications whenever Michael R Blinkhoff releases a new book.