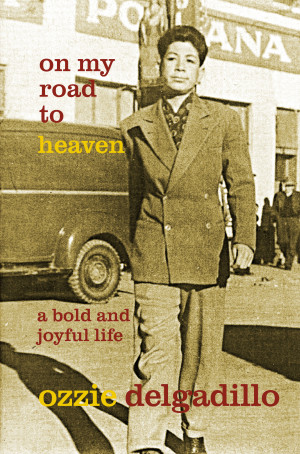 On My Road to Heaven : A Bold and Joyful Life

By Ozzie Delgadillo
Mexico. Juárez in the ‘40s, watch out! Better be nimble, tough, and clever. Ozzie is all that with charm and charisma. He has bold conquests in business, money, romance, and mystical adventures. Through spirit, he does miracles of healing. Later, in his hero’s journey, he loses it all. He surrenders to unconditional love, finds joy and riches within. He fulfills his life purpose—enlightenment. More
When life gave him wealth and glamour, he chose enlightenment instead…

Born poor in Juárez, Mexico, Ozzie Delgadillo always knew he was destined for far greater things. In childhood, he survives a deadly disease, a demonic encounter, and a recklessly abusive father. As he grows into adolescence, he learns the skills of dangerous railroad work. He sneaks out to visit nightclubs with topless dancers. He outsmarts local cops who want to kill him. The culture is macho, yet a girlfriend shows him that true caring makes sex beautiful. He dances with a stunning young woman who unexplainably vanishes. Later, he learns she was not even human—she was an angel.

At 18, in Los Angeles, he has enormous success in business, bringing bold innovation to the real estate industry. He helps others gain greater wealth. With huge success comes fancy cars, imported clothing, romance, and temptation. Ozzie’s appetite for adventure puts him in harm’s way. Deep in bayou country, searching for sunken treasure, he realizes he is with killers who might double-deal. He escapes. At a healing service, disembodied spirits overpower him. The priest refuses to exorcise. Now what?

The moral values of his devout mother, mystical incidents, and a near-death experience make him question his path. He takes workshops to improve his career and explore his psyche. He devours mystical books. Ozzie finds a spiritual teacher, who opens his heart to a greater experience of unconditional love. He uses his charisma to serve others. He travels extensively, facilitating workshops for his spiritual group. He brings joyful spiritual awakening to many in South America and Spain. Through him, spirit works miracles of healing. With a prayer and a touch, he clears a man’s incurable convulsions. He talks to a woman on the phone. She’s in a coma awaiting death. His voice brings her awake.

His spiritual teacher tells Ozzie that he had made an agreement with spirit to know himself completely as a spiritual being. He shouldn’t over create materially or spirit will undermine it. His drive for outer creation persists. Then, the deeper prayer activates its plan. He loses all his wealth. His vision blurs; he faces cancer and a stroke. He lives on drastically reduced means, facing difficulties with a fearless and joyful attitude. He accepts it all in trust, a sense of humor, and unconditional love. He finds joy within and gains the richest reward, fulfilling his life purpose—enlightenment.

In this memoir, you’ll discover how to:
- Find and follow your life’s true purpose,
- Enjoy life right where you are, even in challenges,
- Practice unconditional love for yourself and others,
- Find joy in serving others,
- Realize you are both ordinary and divine,
- Follow spirit to create inner riches,
- And much, much more!

On My Road to Heaven, A Bold and Joyful Life is a tell-all memoir from a remarkable hero to many. If you like far-flung adventures, romantic quests, unconventional gurus, and inspirational insight, then you’ll love Ozzie Delgadillo’s amazing true-life story.

Buy On My Road to Heaven to begin your path to enlightenment today!

Improbable—from Juárez poor to worldly and wealthy. More improbable—he’ll sacrifice it all for enlightenment.

Born in 1934 to a devoted mother and absent, abusive father, Ozzie knew he was far greater than these humble beginnings. Indifferent to school, he learned straight from life—quickly. Mentors helped. A schoolmate improved his speech. A beloved uncle taught him skill and courage in dangerous work on trains. His brother taught him to dance. Macho toughs imparted street smarts. A girlfriend showed him that tenderness brings beauty to sex. He sought high culture in classical music salons.

In Los Angeles, after a decade of factory work, mentors brought him into real estate. With only an eighth grade education, he went on to master complex business deals and introduced bold innovations in real estate sales. His outsized success afforded imported clothes, fancy cars, and romantic encounters.

His appetite for adventure put him in harm’s way. In bayou country, searching for treasure, he realized he was with killers. Uh-oh. At a healing service, disembodied forces overpowered him. The priest refused to exorcise. Now what?

Eventually, he hungered for deeper meaning. He almost died falling off a horse. Amnesia followed with a profound change of consciousness. He devoured mystical books and found a spiritual teacher. He used his charisma to lift others into their goodness. He facilitated workshops for his church throughout South America, bringing spiritual awakening to many. Spirit manifested miracles of healing through him.

The downturn in 2007 wiped out his finances. His health failed. He surrendered, accepting it all with humor, grace, and unconditional love. Always learning, always growing, he found the teacher within. He claimed the richest reward, fulfilling his life purpose—enlightenment.

Ozzie mastered the rules of the games of life, and sometimes he innovated, making new rules. During difficult setbacks he never ever lost his sense of humor nor his ability to savor life. Hero to many, Ozzie radiated powerful optimism and contagious joy. He was deeply devoted to his life partners. He inspires us to enjoy life, to learn from everything, to grow, and to love unconditionally.

You have subscribed to alerts for Ozzie Delgadillo.

You have been added to Ozzie Delgadillo's favorite list.

You can also sign-up to receive email notifications whenever Ozzie Delgadillo releases a new book.