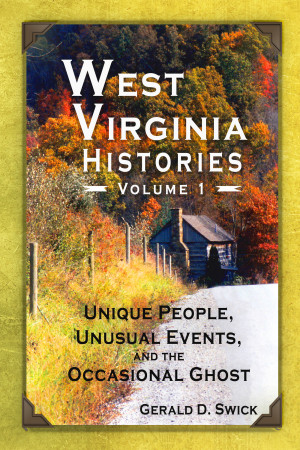 By Gerald Swick
The West Virginia Histories series collects the best of those columns, divided into categories such as Animals, Crime, Civil War, Education, etc. Volume 1 presents samples from each category that will be featured in future volumes. More
“Historical human interest stories.”That’s how a reader described Gerald D. Swick’s column of West Virginia history, “Once, Long Ago,” which appeared each Sunday in the Clarksburg Exponent Telegram for over sixteen years. His unique combination of historical research, skillful narrative, a bit of editorializing, a handful of humor, and a pinch of snark led one fan to tell him, “When I read your column I feel like you are sitting in my living room telling me a story.” The columns received a Press Association Lifestyles Writing award for excellence in journalism and contributed to the West Virginia Humanities Council awarding Gerald a Literary Fellowship in Nonfiction Writing.

The West Virginia Histories series collects the best of those columns, divided into categories such as Animals, Crime, Civil War, Education, etc. Volume 1 presents samples from each category that will be featured in future volumes. The stories come not just from large communities like Bluefield, Charleston, Clarksburg, Fairmont, Huntington, Morgantown, Wheeling and so on, but from Spencer, Volcano, Wellsburg and other small towns. Gerald decided from the beginning that the columns would be about more than just “dead white guys,” and stories of the state’s women and its diverse ethnic groups get their due. Occasionally, especially at Halloween, he set aside the history books to examine Appalachian folklore, from cures for warts to tales of a headless ghost. Additionally, the 100 stories presented in Volume 1 include some never-before-published articles.

If you like a little humor with your history, some fun while learning facts, then open these pages and invite Gerald Swick into your living room to tell you some stories.

Gerald D. Swick’s writing has been recognized with a Literary Fellowship in Nonfiction and a Lifestyles excellence in journalism award. In addition to a weekly column that ran in the Clarksburg Exponent Telegram his work has appeared in The West Virginia Encyclopedia (West Virginia Humanities Council, 2006), The Encyclopedia of World War II: A Social, Political and Military History (ABC CLIO, 2005), and in American History, America’s Civil War, Armchair General, Blue Ridge Country, Travelhost, Wonderful West Virginia and other magazines. His coffee-table book Historic Photos of West Virginia (Turner Publishing, 2010) was authored as a gift to his native state and its people. For several years he served as web editor for the sites of Weider History Group, world’s largest publisher of history magazines.

He and Donna D. McCreary solved the 70-year mystery of why Robert Todd Lincoln, eldest son of Abraham and Mary Lincoln, is not buried with the rest of the family. They shared their findings in the Summer 1998 edition of Lincoln Lore.

His short fiction has appeared in the Mist on the Mon and Dragons Over England anthologies and Appalachian Heritage literary quarterly. Two of his poems were included in Wild Sweet Notes: Fifty Years of West Virginia Poetry, 1950–1999 (Publishers Place, 2000).

Born in Clarksburg, he grew up in nearby Stonewood and graduated from Roosevelt-Wilson High School and Fairmont State College.
Gerald has been a featured speaker at national gatherings including the Association of Lincoln Presenters conference, Celebrate History!, and Women in the Civil War. He was interviewed on NBC Radio and PBS, not for his knowledge of history, but for his multiple victories in the annual O. Henry Pun-Off in Austin, Texas.

Apart from inflicting puns on his friends, his hobbies include photography, playing guitar and historical wargaming.

You have subscribed to alerts for Gerald Swick.

You have been added to Gerald Swick's favorite list.

You can also sign-up to receive email notifications whenever Gerald Swick releases a new book.