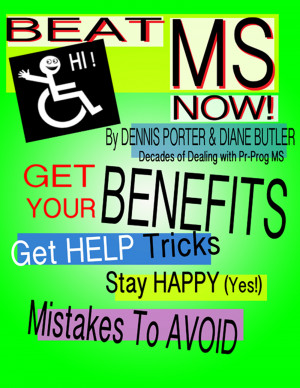 By Dennis Porter
Tips on dealing with MS, with disability, with wheelchairs, with government agencies and the stress of it all. Written by a married couple who face this daunting challenge with relentless good humor and a magical marriage that has stood the test of time. More
Beat MS -- Tips on dealing with Multiple Sclerosis (MS), by a husband and wife who have fought the illness for decades. Diane Butler and Dennis Porter know how to survive disability, government agencies, wheelchairs and the various difficulties for living with this most challenging disease. Diane has Primary Progressive MS and fights it like a champion, doing 60-90 minutes of water aerobic exercises six days a week, assisted by her devoted husband. Lots of shortcuts and tips on how to make the system work for you. Get your Benefits! Apply now, not later! Check out THIS agency! Find your support groups. And cheer up, too. It ain't all bad, let's have a laugh now and then. This is how to fight and win in the war against disability. Get your copy of Beat MS Now! today!
Available ebook formats: epub mobi pdf lrf pdb txt html
First 20% Sample: epub mobi (Kindle) lrf more Online Reader
pdb
Price: $1.99 USD
Buy Add to Library Give as a Gift
How gifting works
Create Widget
Tags: disability multiple sclerosis ms wheelchairs disability benefits get help now get your benefits
About Dennis Porter

Artist Dennis Porter has drawn well over 250,000 faces (and counting), entertaining with live quick-sketches at thousands of parties, trade shows and other functions in more than forty years as a professional caricature artist.

Porter served honorably in the US Army and has worked as a newspaper reporter and editor; along the way he has written five books and a play, been a professional public speaker and failed miserably at standup comedy.

A lightning fast, fun and upbeat caricature artist, Porter’s Quick-Sketches are much in demand as party entertainment, convention booth entertainment and trade show entertainment. His drawings have appeared on television, in newspapers, books and magazines.

The artist has appeared on every television station in the Dayton area. In other TV efforts, he hosted “MEET THE KIDS,” drawing young patients at Children’s Medical Center. The show gave children facing tough issues a moment of fun and a chance to appear on TV. Another television venture was hosting “TALENT With Dennis Porter,” featuring gifted young performers demonstrating their skills in the arts.

Porter said his wife Diane is the secret weapon in the success of their business.
“A terrific partner! Diane is a genius at business issues, honestly — and I am NOT! She does all the hard stuff, I just draw,” the artist said. 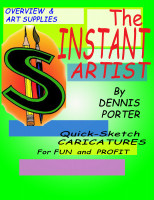 You have subscribed to Smashwords Alerts new release notifications for Dennis Porter.

You have been added to Dennis Porter's favorite list.

You can also sign-up to receive email notifications whenever Dennis Porter releases a new book.