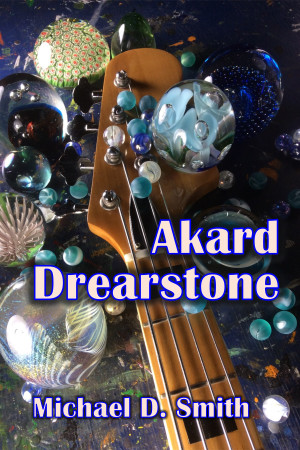 A cinder block falls on Akard Drearstone’s head and he trades his print shop job for lead guitar. Months later, as the four members of the Akard Drearstone Group face the onslaught of national fame at their rural Texas commune, twelve-year-old Jan Pace nurses her crush for the narcissistic, paranoid bassist Jim Piston, growing up way too fast in a surreal summer between seventh and eighth grade. More
At their commune north of Austin, Texas in May 1975 the four members of the Akard Drearstone Group begin to feel the onslaught of national fame as twelve-year-old Jan Pace, daughter of a commune couple, falls in love with narcissistic, paranoid bassist Jim Piston. Lead guitarist Akard Drearstone invites country musician Bill Dunn to play rhythm on the group’s psychedelic masterpiece, “Overturned Runway,” but narcs raid their concert, kidnap Dunn, and kill him. On his wedding night, contemplating the dissolution of his hours-long marriage to Exponentialist philosopher Michelle Morgan, the group’s manager Harray Andreall finds Dunn’s body packed in ice on the second floor of the barn. Though he tries to convince the sullen members of the group that their musical experiment is worth continuing, Harray’s boss has been arrested on murder charges, the record company is near collapse, and Harray is dumbfounded to discover another killing perpetuated by a second band he manages.

Michael D. Smith was raised in the Northeast and the Chicago area, then moved to Texas to attend Rice University, where he began developing as a writer and visual artist. The first six novels in his Jack Commer science fiction series, The Martian Marauders; Jack Commer, Supreme Commander; Nonprofit Chronowar; Collapse and Delusion; The Wounded Frontier; and The SolGrid Rebellion have been published by Double Dragon Publishing. In addition, Sortmind Press has published his literary novels Sortmind, The Soul Institute, Akard Drearstone, Jump Grenade, and his novella The First Twenty Steps. His dystopian, black comedy novel CommWealth was published by Class Act Books.

Smith is currently the Technology Librarian for McKinney Public Library in McKinney, Texas. In his career as a librarian he’s done extensive programming for adults, including book talks and author presentations, and has also marketed libraries through presentations and contacts with local media. His work includes technical assistance for eBooks and eAudiobooks.