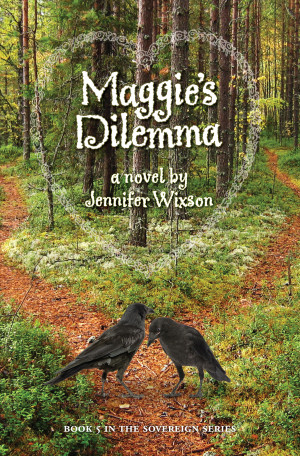 Further complicating Maggie’s life, a shady investment advisor from the city, with whom she has the slightest of acquaintances, has used her name to drum up business with her friends. Should she give them a heads-up that he could be nothing more than a Wall Street wolf in sheep's clothing? Or should she keep silent and let the chips fall where they may? Unfortunately, Maggie chooses to say nothing, and as a result her best friends could lose the farm!

Maine farmer, author and itinerant Quaker minister, Jennifer Wixson writes from her home in Troy, Maine, where she and her husband (fondly known as the Cranberry Man) raise Scottish Highland cattle and keep bees. A Maine native, Jennifer was educated at the School of Hard Knocks, and also admits to a Master's degree in Divinity from Bangor Theological Seminary.

Also in Series: The Sovereign Series

You have subscribed to alerts for Jennifer Wixson.

You have been added to Jennifer Wixson's favorite list.

You can also sign-up to receive email notifications whenever Jennifer Wixson releases a new book.