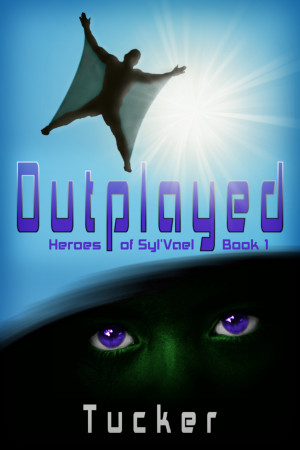 By Tucker
An evil force threatens Earth. Novice heroes must outplay the mastermind behind it… More
Boredom has become a terminal illness for the people of Earth. They are slowly losing interest in everything, including themselves.

Curiosity is the cure, but the evil mastermind responsible for the epidemic stands in their way.

An inexperienced team led by Charcoal, an inhabitant of the planet Syl'Vael, must try to outplay the clever villain that always seems to be one step ahead. Only then can the imagination of Earth be restored.

Tucker has always loved stories. Even before he could read, he would bring large stacks of books for his parents, or others on the space station, to read to him. As he grew, the lack of entertainment available while floating through space prompted him to create his own stories. These were such a hit with the crew (anything remotely entertaining was a hit with the crew) that he continued writing well into his years as a Exploratory Scout for the space station. And eventually, in between getting lost and running into asteroids, he managed to finish a book that he claims is the best in the sector. The crew regularly reminds him that no one else in their sector has written a book, although they usually say this as they're reading through the book for the umpteenth time.

You have subscribed to alerts for Tucker.

You can also sign-up to receive email notifications whenever Tucker releases a new book.