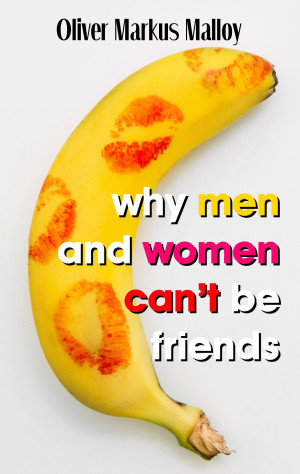 Why Men And Women Can't Be Friends: The Ugly Truth About Men

Women think so. But every man knows that it's impossible. Read this book and find out what really goes on in a man's mind. You will never look at opposite-sex friendships the same way again. More
With candid honesty Oliver Markus Malloy comes to us from the future to once and for all mansplain the age-old question: "Can men and women ever really be just friends?"

Women think so. But every man knows that it's impossible. Read this book and find out what really goes on in a man's mind. You will never look at opposite-sex friendships the same way again.

TRIGGER WARNING FOR MILLENNIALS: This is a book about misogyny. Not in favor of misogyny but against misogyny.

This book has received over a thousand 4 and 5 star reviews on Goodreads, Google Play Books, Amazon, Amazon India, Amazon Canada, etc. Here are just a few of them:

"It reads well. It simply describes a basic biologic truth. All living creatures are driven by the basic drive to reproduce themselves. I have sent this very neat simple story to family and friends."
★★★★★ Thaddeus Kostrubala, MD. Psychiatrist

"The book very well explains the sexual behaviour of a man. All women should read it, to understand the man in their life."
★★★★★ Google Play Book Review

"Ladies, it's all true. It's all about sex. Homo sapien males are not as evolved as you might think. Sorry about that. I don't want to shatter any romantic beliefs you might have but we are what we are. An honest read for women who most likely won't like what they read."
★★★★ Goodreads Review

"He makes some excellent points. But it may also contain some information you'd rather deny or not know at all."
★★★★★ Goodreads Review

"An inconvenient truth. Don't listen to the handful of negative reviews from teenage millennial females. They have zero life experience and their clueless outrage is ill informed. This book speaks the truth about men, and anyone with some life experience will surely agree that this book hits the nail on the head."
★★★★★ Amazon Review

"Tells it like it is. Backs up what I've thought for years... As well as what I've told my daughter about young men that she is friends with. Great book for young marrieds."
★★★★ Amazon Review

"This pretty much makes all of my mother's advice quite valid, about men. Who really knew?"
★★★★★ Amazon Review

"I've been around a while, being a 60 year old grandmother. The book was very blunt, very interesting, honest and a little comical. I have to say I agree that men think and feel that way. I don't have a problem with it. It is what it is. They just have to control it, be civilized. This would be an eye opening read for an inexperienced naive young lady..."
★★★★★ Goodreads Review

"Very blunt and funny. Some of the statements left me speechless because I can't believe I never knew these things before."
★★★★★ Amazon Review

"This was quite shocking for me to read at first. But I continued reading and in the end I did learn something new. Thus, this was a good read even though I did not like the beginning of it. Girls, if you happen to want to understand men better, you should try reading this book."
★★★★ Google Play Book Review

"A fun read that's also educational. This book really opened my eyes. Now it all makes sense. Every student should read this in college."
★★★★★ Amazon Review

"Changed the way I used to think about men! It would definitely stop me from wasting my time in reading romantic novels or fantasizing the like. Really opened my eyes wide!"
★★★★★ Google Play Book Review

"This has changed the way I think about men and I will never misinterpret their actions again."
★★★★★ Amazon UK Review

Oliver Markus Malloy is a German-American novelist and comic artist. Born and raised in Aachen, Germany, he currently lives in Los Angeles, CA.

Malloy began his writing career in the early 1990s, as editor-in-chief of a computer magazine with a monthly circulation of over 500,000, which was distributed by Germany's largest publishing house.

His bestselling trilogy, Bad Choices Make Good Stories, has been downloaded over 100,000 times.

About the Series: Educated Rants and Wild Guesses

With candid honesty Oliver Markus Malloy comes to us from the future to once and for all mansplain the age-old question: "Can men and women ever really be just friends?"

Women think so. But every man knows that it's impossible. Read this book and find out what really goes on in a man's mind. You will never look at opposite-sex friendships the same way again.

You have subscribed to alerts for Oliver Markus Malloy.

You have been added to Oliver Markus Malloy's favorite list.

You can also sign-up to receive email notifications whenever Oliver Markus Malloy releases a new book.