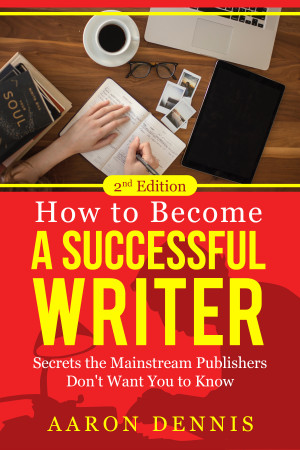 How to Become a Successful Writer: Secrets the Mainstream Publishers Don't Want You to Know

This book not only teaches how to write, but also how to market, edit, publish, and all with exercises and even free resources. From start to finish, the ideas presented are done so in an easy to understand and entertaining fashion. By the end of this manual, you will not only know how to write, edit, publish, and market your book, but you’ll know what kind of publishing is right for you.

How to Become a Successful Writer
This manual brings to your fingertips all the practical knowledge required to build your long term writing career. Any writer of any level will benefit from the material within this comprehensive guide. From the neophyte to the professional, anyone who reads this book will learn everything from formulating an idea for a story to finding the right kind of publisher.

I’ve said it before and I’ll say it again. I’m not a writer, but I bought and read this book by Aaron Dennis, How to Become a Successful Writer: Secrets the Mainstream Publishers Don’t Want You to Know. First of all, it was only 99 cents, but I bought it because I like Dennis’s style, and I just wanted to see what it was all about, and really the title kinda’ got got me. Why wouldn’t publishers want you to know these secrets? And what are they?

Anymeow, I have to admit that it was quite entertaining. There were a few times I even chuckled, but basically the book is broken down into two parts, or three, I guess. It starts off with tips about how to come up with an idea for writing, goes into writing short stories, fan fiction, and then how to build an online presence, and all before releasing your first novel. The book then goes into marketing and publishing before moving on to the next part–editing.

The first portion about writing even has some exercises, which are super simple. The second portion really breaks down a lot of the concepts behind writing, like finding plot holes, dumping info, avoiding redundancies, and so on. It’s a lot of stuff I didn’t think about when I think about “editing.” Dennis does touch on punctuation, but most of his editing advice is tailored towards modifying what you’ve written to best present it to your target audience.

His motto seems to be: writing is just putting sequential events into words, editing is the art of transforming those accounts into a story worth reading. I can’t agree more.

There is a third portion in the book. It’s just a few pages, but he gives out resources like other sites and even people to contact if you need cover art or whatever, so really, for 99 cents, you can’t go wrong. It definitely gave me something to mull over while reading other books.

The funny thing about this book is the true premise behind it. For one, the secrets provided aren’t really secrets so much as purrr-haps uncommon knowledge. Things you might not now if you’ve never written or at least never tried to publish or be published. Stuff like, how to find a literary agent, how to build a presence, which type of publishing is right for you. Two, the reason publishers don’t want you to have these secrets, Dennis claims, is because if you know all these points of articulation, you really can become a successful writer on your own, though he admits it can take a long time. Finally, it seems Dennis wants all new writers or aspiring writers to start their careers out properly, and he even goes on to explain all of his mistakes along the way, and how best to avoid them.

I wasn’t so much surprised that I enjoyed this book because I just enjoy Dennis’s writing anymeow, but I was surprised to find that a book about how to write, edit, and publish was presented in such a humorous way. In other words, it was just fun to read and to get a look inside the head of a notable writer. I mean, for 99 cents, you can’t go wrong. There’s gonna be something between the covers of How to Become a Successful Writer: Secrets the Mainstream Publishers Don’t Want You to Know for you to learn, something, so it’s worth 99 cents.