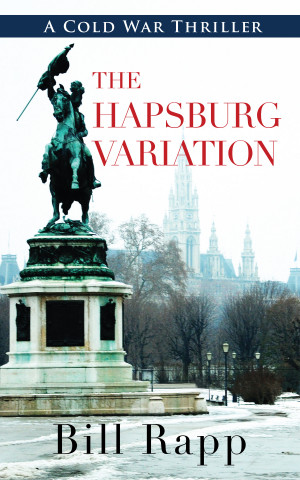 By Bill Rapp
Karl Baier is the CIA’s deputy chief of station in Vienna, 1955. As the Allies are about to return Austria’s independence, the body of an old Austrian aristocrat surfaces. Baier is asked to investigate. Then his wife is kidnapped, and he suspects a connection. Who killed Herr von Rudenstein, and will solving the mystery help Baier rescue Sabine? More
Eight years into his career with the CIA, Karl Baier once again finds himself on the front line of the Cold War. He is stationed in Vienna in the spring of 1955 as Austria and the four Allied Powers are set to sign the State Treaty, which will return Austria’s independence, end the country’s post-war occupation, and hopefully reduce tensions in the heart of Europe. But the Treaty will also establish Austrian neutrality, and many in the West fear it will secure Soviet hegemony in Eastern Europe and create a permanent division. Asked to help investigate the death of an Austrian aristocrat and Wehrmacht veteran, Baier discovers an ambitious plan not only to block the State Treaty, but also to subvert Soviet rule in lands of the old Hapsburg Empire. Then Baier’s wife is kidnapped, and the mission becomes intensely personal. Many of his basic assumptions are challenged, and he discovers that he cannot count on loyalties, even back home in Washington, D.C. At each maddening turn in the investigation, another layer must be peeled away. Even if Baier succeeds in rescuing his wife, he faces the unenviable task of unraveling an intricate web of intrigue that reaches far back into the complicated history of Central Europe. Book 2 in the Cold War Thriller series, which began with Tears of Innocence.
Available ebook formats: epub mobi pdf lrf pdb txt html
First 20% Sample: epub mobi (Kindle) lrf more Online Reader
pdb
Price: $5.95 USD
Buy Add to Library Give as a Gift
How gifting works
Create Widget
Tags: austria vienna cold war ussr 1955 postwar europe cia mystery cia missions cia fiction state treaty
About Bill Rapp

Bill Rapp recently retired from the Central Intelligence Agency after thirty-five years as an analyst, diplomat, and senior manager. After receiving his BA from the University of Notre Dame, an MA from the University of Toronto, and a PhD from Vanderbilt University, Bill taught European History at Iowa State University for a year before heading off to Washington, D.C. The Hapsburg Variation is the second book in the Cold War Spy series featuring Karl Baier. Bill also has a three-book series of detective fiction set outside Chicago with P.I. Bill Habermann, and a thriller set during the fall of the Berlin Wall. He lives in northern Virginia with his wife, two daughters, two miniature schnauzers, and a cat.

About the Series: A Cold War Thriller

A CIA Spy series set during the Cold War in Europe.

Reviews of The Hapsburg Variation by Bill Rapp

You have subscribed to Smashwords Alerts new release notifications for Bill Rapp.

You have been added to Bill Rapp's favorite list.

You can also sign-up to receive email notifications whenever Bill Rapp releases a new book.