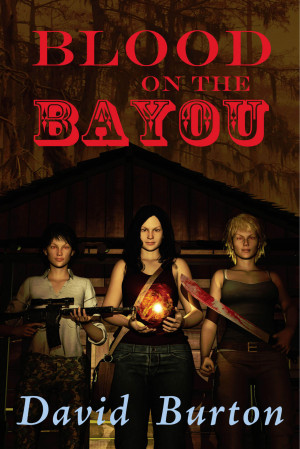 Blood on the Bayou

The three friends hit the road for The Big Easy and are immediately catapulted into a complicated war between rival vampire families, their business associates and their adversaries--all of whom also want to find the missing girls. As Teresa, still mastering her magical powers, fights alongside Justine and Simone against vampires, sorcerers and corrupt law enforcement, enemies from the past are pursuing them all. Meanwhile, Antonia's captor, an ancient vampire named Rubicon, is using the girl for an experiment whose outcome could have world-ending implications for mortals.

From the Katrina-scarred streets of New Orleans to the most inaccessible depths of Louisiana swampland, the three women pursue tenuous clues as lethal mercenaries human and supernatural follow close behind. Will they learn where Antonia is held? Or will treachery and the frailty of human life take them to a dead end?

Picking up the storyline from Blood Justice and Blood on the Water, Blood on the Bayou continues award-winning author David Burton's exciting saga of love, loss and vengeance.

David Burton has been a boat builder, sailor, and custom cabinetmaker and has traveled by thumb, motorcycle, and sailboat. Upon returning from sailing in the South Pacific, he turned to writing. His first published book was a mystery, Manmade for Murder (Write Way Publishing, 1997. Paperback, Worldwide Mysteries, 2000). It was a selection of the Detective Book Club. Hell Cop (Silver Lake Publishing, 2004), a supernatural adventure story, was his second published novel and won 3rd place at the 1998 Colorado Gold Writers Conference. The ebook version was a finalist for the EPPIE awards. Blood Justice, a vampire revenge novel, will be published by By Light Unseen Media in 2010.

He has also written screenplays, including an adaptation of his Hell Cop and Fear Killer novels. The screenplay adaptation of Hell Cop won 1st place at the Pikes Peak Writers Conference in 2002. Another screenplay, Time For Love, took 1st place at Pikes Peak in 2001. David now lives with his wife in Southern California and is working on more stories and characters that pass thorough his life and brain in both novel and screenplay form.
David Burton may be contacted at dcburtonjr [at] gmail [dot] com

You have subscribed to alerts for David Burton.

You have been added to David Burton's favorite list.

You can also sign-up to receive email notifications whenever David Burton releases a new book.