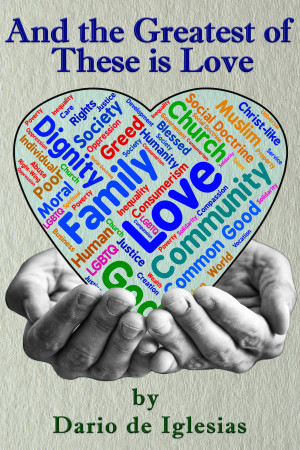 And the Greatest of These Is Love

Dario de Iglesias was born in Waukesha, Wisconsin. He graduated from Sparta Senior High School in Wisconsin in 1974, after which he reported for Army basic training at Ft. Ord, California, then phase one of his Advanced Individual Training Defense Language Institute, Presidio of Monterey, California and phase 2 at Goodfellow AFB, Texas in March, 1975. He then served with the 408th Army Security Agency Company at Ft. Clayton, Panama Canal Zone until January, 1978. From there, he attended another AIT at Ft. Rucker, Alabama, and was then stationed at Ft. Riley, Kansas; Ft. McCoy, Wisconsin; and with the 5th Army Headquarters in Stuttgart, Germany. He completed his enlistment in May 1981 and joined the Air Force Reserve later that year.
Dario received a Bachelor of Arts degree in Spanish with a concentration in Latin American Studies from the University of Wisconsin – LaCrosse in 1984 and received a Master of Arts degree in Spanish with a focus on secondary education from the University of Wisconsin – Madison in 1987.
He moved to Chicago after completing his Master’s Degree to accept a teaching position at Morgan Park Academy, a private school on Chicago’s south side. By 1989, he would become advisor to the Key Club and a member of the local Kiwanis Club. As a Chicago Kiwanian, Dario served on the Board of Directors, and the Executive Board of Directors. In 1998, he was elected Lieutenant Governor of his local Division.
While continuing to teach, Dario affiliated with the Navy Reserve in May, 1997 at Great Lakes and transferred to San Antonio and the Medina Annex, Lackland AFB, Texas, in 1999. During his Navy tenure, he has served in Guantanamo, Cuba; aboard the US Coast Guard Cutter CGC Harriet Lane, SOUTHCOM Headquarters, Miami, Florida, Joint Interagency Task Force South, Key West, Florida; and Commander Naval Forces Europe/Commander Sixth Fleet, Naples, Italy. He retired from the Navy Reserve Naval Information Operations Command Medina, Lackland AFB, Texas in 2009.
Dario is a very active member of his local Catholic Parish, and is a veteran income tax preparer through the Volunteer Income Tax Assistance (VITA) Project in San Antonio.

You have subscribed to alerts for Dario de Iglesias.

You have been added to Dario de Iglesias's favorite list.

You can also sign-up to receive email notifications whenever Dario de Iglesias releases a new book.