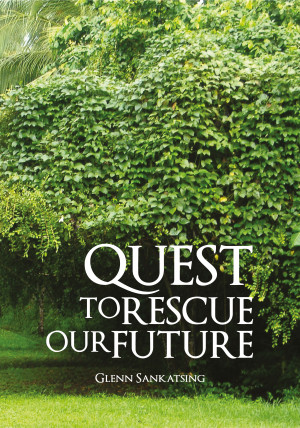 Quest to Rescue Our Future

By Glenn Sankatsing
Quest to Rescue Our Future chronicles the path of humanity, diagnoses our present misfortunes, identifies the dangerous trends and maps the desirable and feasible futures. Most importantly, it locates the transformative social forces that are still intact – the moral reserves of humanity – and delves into the strategy and actions that can shape a different version of humanity. More
Humanity has been tampering dangerously with the exceptional conditions that made life possible on Earth. We have disconnected recklessly from the life-enhancing force of evolution, targeted nature as a legitimate object of predation and turned war into the supreme arbiter to settle discords. Humanity has gone astray and is already hanging over the abyss of oblivion. Now, the planet is sounding severe warnings – some of them with the intonation of a final call – but the reigning system has turned off the thermostat of pain. The anomaly of selfishness, individualism and competition at the service of the triumvirate of greed, power and fame needs to make way for the warmth of solidarity, cosmopolitanism and communitarianism as the life-enhancing worldview. If we join together to take command of our destiny, humanity will have a powerful synergetic force to rescue its future. We simply need to make the right choice. If we do not learn to live together we will die together.

Quest to Rescue Our Future chronicles the path of humanity, diagnoses our present misfortunes, identifies the dangerous trends and maps the desirable and feasible futures. Most importantly, it locates the transformative social forces that are still intact – the moral reserves of humanity – and delves into the strategy and actions that can shape a different version of humanity. The quest identifies Life looking for more life as the underlying force of evolution, which reveals how culture, freedom and evolution merge in development, understood as the mobilization of inherent potentialities in interactive response to the challenges posed by nature, habitat and history to realize a sustainable project with an internal locus of command. This life-enhancing force of development offers humanity a powerful tool for the urgently required overhaul. We may well stand before the last opportunity to reconnect to the evolutionary process that gave us existence, before nature proceeds to remove us as an unreliable companion of life and an obstacle in evolution. Today, we are not running out of options but we are running out of time. We need to act quickly. Action is the best prediction. It is now or never, hence now.
Available ebook formats: epub mobi pdf lrf pdb
First 7% Sample: epub mobi (Kindle) lrf more
pdb
Price: $9.50 USD
Buy Add to Library Give as a Gift
How gifting works
Create Widget
Tags: environment globalization philosophy evolution ethics development fundamentalism civilization anthropocentrism eurocentrism
About Glenn Sankatsing

Glenn Sankatsing, born on a sugar plantation in colonial Suriname, wanted to become a cosmopolitan, a desire that many years of residence in The Netherlands, Suriname, Venezuela and Aruba facilitated. His interest in the social evolution of humanity and its future options, at a time that all development theories had failed, brought him to a yearlong trek as a backpacked student to sense the turbulent revolutionary landscape of South America in the 1970s, a journey that started in Caracas (Venezuela) and ended abruptly at two blocks from the burning Presidential Palace in Santiago (Chile) in 1973, as one of the most brutal military coups in the history of Latin America was on its way. A Master’s degree within the parochial confines of sociology in the Netherlands was eventually overcome by the extradisciplinary approach elaborated in his PhD dissertation on the shaping of the social sciences in the Caribbean (Central University of Venezuela). In his professional career, he was Director of the Institute of Economic and Social Research of the University of Suriname, General Editor of the Surinamese Journal of Social and Economic Studies, President of the Social Science Research Council at the University of Suriname, Vice-President of the XIIIth Latin American Congress of Sociology (Panama City) and Member of the Academic Board of the Instituto Venezolano de Estudios Sociales y Políticos en Caracas, while he lectured at several universities and worked as an international consultant and researcher for UNESCO and OAS. Presently, he is Director of Caribbean Reality Studies Center (www.crscenter.com), Coordinator of the PhD Research School of the University of Aruba and Board member of the Rescue Our Future Foundation. Among his most quoted publications are Caribbean Social Science: An Assessment (Caracas, UNESCO, 1989), Social Science as a Victim of its Own Disciplines (in a volume on Caribbean Sociology, 2001), People’s Vote Compatible with People’s Fate: A democratic alternative to liberal democracy (book chapter, 2004) and Quest to Rescue Our Future (2016).

Reviews of Quest to Rescue Our Future by Glenn Sankatsing

You have subscribed to alerts for Glenn Sankatsing.

You have been added to Glenn Sankatsing's favorite list.

You can also sign-up to receive email notifications whenever Glenn Sankatsing releases a new book.