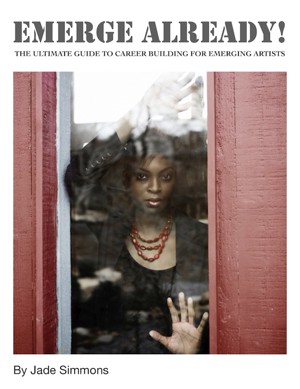 Emerge Already is designed for both the artist fresh out of school and for those in the throes of a career looking to take their careers to the next level. With refreshing honesty, Jade offers crucial information and uncommon advice all while dismissing taboos associated with self-promotion and letting the reader in on what really happens behind the scenes in the makings of a career. She does so with humor, a genuine compassion for the plight of emerging artists and with a sincere desire to see them succeed in a tough, but ultimately permeable industry.

An uncommon display of passion and innovation at every turn, pianist Jade Simmons is easily one of the most exciting and versatile artists on the scene today.

Chosen as the inaugural New Music/New Places Fellow for the prestigious Concert Artist Guild organization, Jade is committed to expanding the boundaries of Classical music. She offers a diverse mix of repertoire from the classics to the cutting edge, all presented with her unique brand of communicative powers. Audiences have come to expect creative projects backed by riveting performances like her program Kandinsky and Scriabin: Hearing Color, Seeing Sound which focuses on links between visual art and music, as well as The Rhythm Project, an exploration of pieces that exploit the more percussive nature of the piano. An extension of The Rhythm Project, Jade Simmons released her debut CD in March 2009 for E1 Music entitled Revolutionary Rhythm, praised by Allmusic.com as “a thought-provoking, entertaining, and fun debut that easily establishes Simmons as a major talent.”

Ms. Simmons has toured the US extensively, highlighted by concerts on the Ravinia’s Rising Stars series, the National Academy of Sciences in Washington, DC, the University of Washington World Series in Seattle, Merkin Hall and the Detroit Institute of Arts. Her performances of Guggenheim award-winning composer Tania Léon’s piano works alongside pianist Ursula Oppens was named one of the Best Concerts in 2005 by ARTFORUM magazine.

She has appeared as concerto soloist with the Dallas Symphony, the Chicago Sinfonietta at Chicago’s Symphony Hall, the Philharmonic Orchestra of the Americas at Town Hall, the University of Chicago and the Imperial Symphony Orchestra. 2011 marks a double concerto debut with the Illinois Symphony and a Disney Hall debut with the Southeast Symphony. Simmons has also performed in New York’s many alternative spaces including Symphony Space, Harlem Gatehouse, Le Poisson Rouge, Joe’s Pub and Brooklyn’s BamCafé.

Ms. Simmons is a passionate advocate for the arts in education and has created multiple programs suitable for all ages used with great success across the country. Past residencies include the University of Chicago, the Cliburn Foundation and the Mississippi Symphony. 2011 collaborations include performances with the Ritz Chamber Ensemble and a residency with Georgia Tech University’s ARTech program.

An artist with a social conscience that moves her to action, Jade serves as an advocate for America’s youth, addressing groups across the country on sensitive issues such as suicide prevention and mental health awareness. In 2009, Jade became the inaugural Spotlight Artist
for Music for Autism, a New York-based organization for which she performs and has assisted in their expansion to Houston, TX. Jade has been recognized two years in a row by Symphony Magazine for her work on and away from the stage. In light of these achievements, Jade was listed as one of Ebony magazine’s Top 30 Leaders under 30.

Jade’s multiple talents make her a true Renaissance woman of the millennium taking her in the direction of arts presenter as founder of the Impulse Artist Series, 2009 winner of Best Non-Profit Arts Series (Houston); writer, lecturer and creator of Emerge Already!, career-building advice for emerging artists including videos, blogs and books.

In the summer of 2009, the world got to know Jade as the webcast host for the 13th Van Cliburn Piano competition, where she introduced all the performances and conducted live interviews with renowned figures, including Van Cliburn, Fred Child and Bob Schieffer throughout the 17-day event. In 2011, she’ll serve in the same capacity for the world famous International Tchaikovsky Competition in Moscow.

A native of Charleston, South Carolina, Jade completed her undergraduate work in piano performance at Northwestern University under Sylvia Wang. While there, she co-founded the immensely popular percussion and dance ensemble Boomshaka!. Simmons also became Miss Chicago, Miss Illinois and ultimately first runner-up at the 2000 Miss America Pageant where she performed Chopin’s Etude in C-sharp minor, Op. 10, No. 4, before a live television audience of millions. Ms. Simmons holds a Master’s degree from Rice University, where she studied with acclaimed pianist Jon Kimura Parker.

Reviews of Emerge Already! The Ultimate Guide to Career Building for Emerging Artists by Jade Simmons

This book is very useful

This book contained so many helpful and thoughtful insights. The read left me excited about working on my career from new angles and with a new outlook.

kudos to jade for altruistically sharing her knowledge and expertise in helping other aspiring concert pianists attain their goals in this very practical and motivating resource guide. her animated, enthusiastic, and confident voice resounds with every word.

(reviewed the day of purchase)
Gabriel Tellis-Dazs reviewed on Sep. 27, 2011
(no rating)
Jade Simmons really hits it out of the park with this one! Its everything from her Emerge Already series and more! She leaves no nook or cranny untouched! Very sweet and straight to the point. Its a refreshing read and I definitely recommend it.

Far more entertaining and readable than a dry academic text, this book should be obligatory study at every music school, academy, college and conservatory.

With bang up to date information and advice on developing a music career in the 21st century, Pianist Jade Simmons honestly shares what it's really like to be a musician today in the real world.

Also highly recommended for anyone who's finding it difficult coming to terms with the changes that are currently sweeping through the industry.

Have you got what it takes? Buy the book and find out!

"Now is the time to take control of your career." Don't wait for some conductor or PR person to find you. Read this book and get started... Energy already.

Great information and inspiration from Jade Simmons, covering every aspect of the performer's career development. I'm giving to all my students who are preparing for a life in the music profession.

You have subscribed to alerts for Jade Simmons.

You have been added to Jade Simmons's favorite list.

You can also sign-up to receive email notifications whenever Jade Simmons releases a new book.