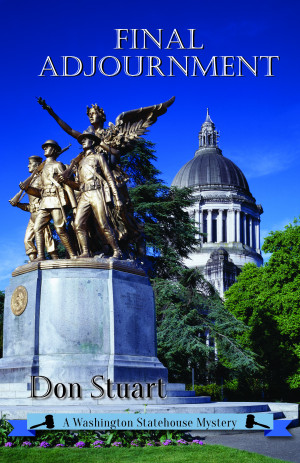 By Don Stuart
The scenic campus of the Washington state capitol may be outwardly calm... but turmoil swirls beneath the surface. When a senator is found dead in his office with a Native American hunting knife buried in his chest, lobbyist Sandy Dalton must team up with the detective on the case to clear his own name. More
The scenic campus of the Washington state capitol is outwardly calm, but the Legislature is in session and no one better understands the turmoil that swirls beneath the surface than professional lobbyist Sandy Dalton. In the middle of a busy day, a powerful senator is found dead in his office with an antique Native American hunting knife in his chest. Sandy becomes the prime suspect in the case, having had an argument with the senator the morning of the murder and been the last to see him alive, but he isn't the only one to have disagreed with the senator's policies. The resulting tectonic shift in the political landscape turns the legislative world upside down.

As motives, conflicting testimonies, and hints of behind-the-scenes blackmailing add up, Sandy embarks on a struggle to clear his name. It seems almost everyone in Olympia politics has a stake and almost anyone could be the killer.
Available ebook formats: epub
Price: $4.95 USD
Buy Add to Library Give as a Gift
How gifting works
Create Widget
Tags: murder lobbyist salmon fishing washington state legislature olympia commercial fishing fishery
About Don Stuart

Don Stuart has over 20 years of lobbying experience in the Washington, Oregon, and Idaho State Legislatures and in the U.S. Congress. He served as Executive Director for Salmon for Washington, a trade group representing commercial fishermen and fish processing firms (1990-96), Executive Director for the Washington Association of Conservation Districts, a professional association representing local governments assisting agricultural landowners (1997-2000), and Northwest Regional Director for American Farmland Trust, a national environmental organization protecting local farmland from development (2000-2011). Don was also the campaign manager and public spokesperson in the successful defense of a Washington statewide anti-commercial fishing ballot initiative (I-640) in 1995 and he ran for the U.S. Congress in Washington’s First District in 1996.

Don is also a former Alaska commercial salmon troll fisherman (1962-65, 1980-89), a formerly practicing Seattle trial attorney (1972-79), and was a Lieutenant in the U.S. Navy Judge Advocate General’s Corps during the Viet Nam War (1968-72). His opinion column on fish politics appeared monthly in the Fishermen’s News from 1990-96. He is the author of Barnyards and Birkenstocks: Why Farmers and Environmentalists Need Each Other, published by Washington State University Press (2014), and of The Washington Guide to Small Claims Court, published by Self-Counsel Press (1979).

You have subscribed to alerts for Don Stuart.

You have been added to Don Stuart's favorite list.

You can also sign-up to receive email notifications whenever Don Stuart releases a new book.