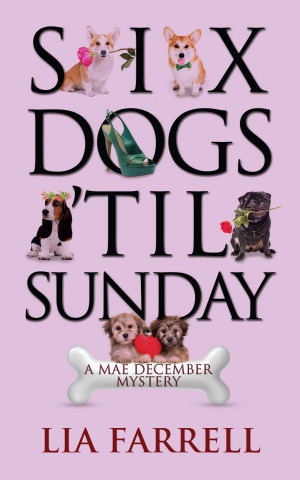 By Lia Farrell
As Mae and Sheriff Ben Bradley prepare for their March wedding, they are distracted by a murder on the set of a movie being filmed in the house down the street. For its soundtrack, the film uses music by Mae’s former fiancé, four years dead. The victim was stealing money from a safe when he was shot. Whose money is it, and where did it come from? The sixth and final Mae December Mystery. More
It’s January in Rosedale, Tennessee, and Mae December is preparing for her March wedding to Sheriff Ben Bradley. Mae, who boards dogs for a living, is also busy tending to her pregnant dog and scouting locations for the movie featuring the music of her former fiancé Noah West, who died in a car accident four years earlier. Fortunately the picturesque old house at the end of Little Chapel Road is for rent.
Just as filming is about to begin, a man is shot on the set, but manages to drive himself to the hospital, where he dies before he can ID his killer. He was a member of the film crew, but also a local, and circumstances point to his being a confidential informant for Ben’s predecessor, Sheriff Trey Cantrell, also the owner of the house turned movie set. At the time of the shooting, the victim had been stealing a large sum of money from a safe on the premises. Whose money is it, and where does it come from?
The Rosedale Sheriff’s Office not only has another murder case on its hands, but one that will dredge up a past long buried. How far will the guilty parties go to protect their secrets?
The sixth and final book in the Mae December Mystery series, which began with One Dog Too Many.

Lia Farrell is the pen name of the mother and daughter writing team of Lyn Farquhar and Lisa Fitzsimmons, who live in Michigan and Tennessee, respectively. Both are life-long readers who are also dog lovers. Lyn owns two Welsh corgis and Lisa has two pugs and a Siberian husky. Lisa works as a Muralist and Interior Designer and Lyn is a Professor of Medical Education. One Dog Too Many is their first novel. The next book in the Mae December Mystery series will be Two Dogs Lie Sleeping, which will be released by Camel Press in 2014. For more information, go to liafarrell.net.

About the Series: A Mae December Mystery

Set in a small town in Tennessee, this series features a diverse ensemble of well-loved characters--the family, colleagues, and friends of dog breeder and boarder Mae December and her fiancé Sheriff Ben Bradley.

You have subscribed to alerts for Lia Farrell.

You have been added to Lia Farrell's favorite list.

You can also sign-up to receive email notifications whenever Lia Farrell releases a new book.