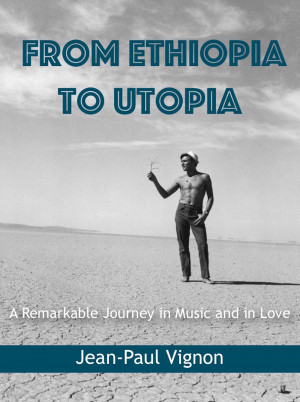 From Ethiopia to Utopia: A Remarkable Journey in Music and in Love

As a boy in Djibouti, Jean-Paul studied hard, but dreamed of dancing with Ginger Rogers and singing with Mickey Rooney. His attempts to pursue medicine, then law, in Paris were no match for his desire to perform, and he quickly pivoted to a singing and songwriting career in Paris. His work in cabarets led to his discovery by a French film producer, which led to a career in film. Jean-Paul rode the New Wave to New York, singing on Le Liberté all the way to Manhattan, where he appeared on stages and screens across America.

Every step on his path was paved with love–his love of life, of music, and especially of women–from the first kiss at five years old, to the married woman who stole his virginity at 16, to the Parisian lesbian who wanted to experience a man, to the forbidden shipboard romance en route to America, to his first wife who bore him a beautiful daughter. Jean-Paul’s experiences of life and romance have brought him to his ultimate beloved, and a joyful peace that comes from a life well-lived.

Jean-Paul Vignon was born in Ethiopia not long before World War II, of a French father and an Italian mother. He spent his childhood in Djibouti, and studied in France. His exotic background gave him a passion for life, and imbued his singing style with an irresistible sensuality.

As a boy, Vignon was fascinated by movies. As a teenager, he admired the great French singer-songwriters Charles Trenet and Charles Aznavour, and was also attracted to American singers like Frank Sinatra. Vignon’s expansive musical taste gave his style a uniquely universal appeal.

As a young man, Vignon appeared in Paris cabarets, recorded under his own name, and starred in two French films. When he sang on Le Liberté en route to the United States, he was offered an opportunity to develop his career in America–the dream of a lifetime.

In New York, he made his debut at The Blue Angel, opening the show for a young Woody Allen. Ed Sullivan’s scouts saw him, and signed him for eight appearances. He became a regular guest on The Merv Griffin Show; his European charm, natural humor, and special charisma delighted American audiences. After he moved to Los Angeles, he became an American citizen, and made his American film debut with William Holden in THE DEVIL’S BRIGADE. Among his many other acting roles, Vignon’s voice can be heard in such films as SHREK and 500 DAYS OF SUMMER, in which he is the French Narrator.

Vignon is a devoted father to Marguerite, and grandfather to Leah and Hannah, and lives very happily with his wife Suzie in Beverly Hills, California.

Reviews of From Ethiopia to Utopia: A Remarkable Journey in Music and in Love by Jean-Paul Vignon

You have subscribed to alerts for Jean-Paul Vignon.

You have been added to Jean-Paul Vignon's favorite list.

You can also sign-up to receive email notifications whenever Jean-Paul Vignon releases a new book.