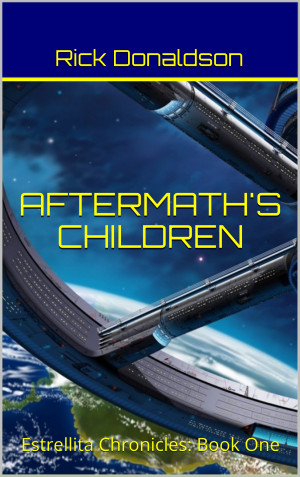 Aftermath's Children, Book One of the Estrellita Chronicles begins in space, but when the forces of good and innocent meet deranged and evil, someone is going to come out on top and someone must lose. Only two choices remain for the people of the Estrellita: Death in space, or making a dangerous run for a dead Earth. More
Originally, the Space Station Estrellita started as a Mars jump off point, but when a wild AI got loose and assisted the human race in its own self annihilation, a few men and women put a plan together to "save" the human race. Estrellita is the home for over four hundred-fifty people, many of whom were born on the Space Station, and many want to go back to Earth. Some do not. With the aging systems aboard the Station beginning to fail, there may be no choice for any of them.

Doctor Ernie Oppenheimer felt responsible for their current predicament, after having been put in charge of the original rescue of the human race. Now, some thirty-plus years later, he was aging and wanted to go back to Earth. The people on this station deserved better than to remain here, eventually to die off. He had been formulating a plan for years and it seemed as good a time as any to implement it. He needed a few allies. Besides, he'd always been good at getting what he wanted. Unknown to Oppenheimer, there was another who had conflicting plans.

Aftermath's Children, Book One of the Estrellita Chronicles begins in space and when the forces of good and innocent meet deranged and evil, someone is going to come out on top and someone must lose.

Rick is a former military Non-Commissioned Officer serving twenty-six years in the United States Air Force in Combat Communications, the White House Communications Agency and as the Communications Flight chief for the 302nd Tactical Airlift Wing. Rick has served the Missile Defense Agency as a Security Engineer and Electronics Technician.

He has been a communicator, military trainer, college teacher and contractor, and has worked with his family over the last 40 years to develop survival skills in the children and now the grand children, spouses and other family and friends. Rick has traveled extensively having visited approximately fifty countries, including islands in the South Pacific, Caribbean, and five continents.

Rick's hobbies include Sailing, Amateur Radio, Amateur Astronomy, building and shooting bows and arrows, hiking, sword fighting and writing. Rick does not consider himself to be "an expert" in all forms of survival but has a "Jack-of-All-Trades" knowledge in many fields. He believes that being an expert in only one field of experience is limiting to the individual, while having even some small knowledge in many fields, however rudimentary that knowledge might be is more helpful.

Rick and his wife, JoAnne live aboard the Sail Ketch "Adventure" traveling around the US East Coast, Bahamas and Caribbean.

You have subscribed to alerts for Rick Donaldson.

You have been added to Rick Donaldson's favorite list.

You can also sign-up to receive email notifications whenever Rick Donaldson releases a new book.