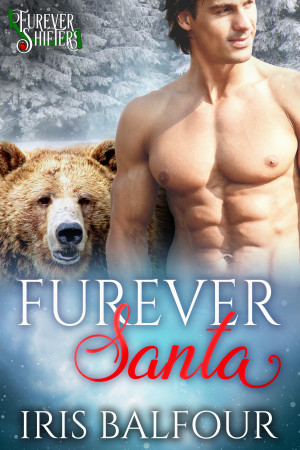 When bear shifter Hugh Grissom plays Santa at a party, he falls hard for curvy Ruby Wallace and her half-shifter toddler. But Ruby doesn’t have time for some joker in a Santa suit. Not after her last encounter left her mauled and pregnant. Hugh can't let her walk away. For the sake of Ruby’s daughter—and his heart—somehow Hugh has to win past her distrust and claim his fated mate. More
Bear shifter Hugh Grissom isn’t thrilled about playing Santa at his sister’s charity party—until he glimpses curvy Ruby Wallace and her half-shifter toddler. As chief of the Montana shifters, Hugh needs to make sure the cub is prepared before her first shifting.

Between struggling to pay the rent and taking care of her daughter, Ruby doesn’t have time for men, much less some joker in a Santa suit. It doesn’t matter that her heart sings when their eyes meet. Not after her last encounter with a man left her mauled and pregnant.

Hugh can’t let Ruby walk out of his life. For the sake of Ruby’s daughter—and the sake of his heart—somehow he has to win past her distrust and claim his fated mate.

A native Californian, Iris lives and writes in her urban home surrounded by redwoods. She is guardian to one cat, who also serves as her personal trainer by ensuring Iris rises early from bed and often from her chair whenever the need for petting/food/playtime arises. When not writing or performing cat duties, Iris enjoys walking and swimming.

Sign up to get an email when new books are released:
http://irisbalfour.com

You have subscribed to alerts for Iris Balfour.

You have been added to Iris Balfour's favorite list.

You can also sign-up to receive email notifications whenever Iris Balfour releases a new book.