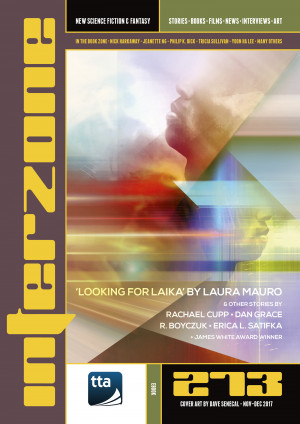 Looking for Laika by Laura Mauro
illustrated by Richard Wagner

After the Titans by Rachael Cupp
illustrated by Richard Wagner

The Garden of Eating by R. Boyczuk
illustrated by Martin Hanford

2017 James White Award Winner:
The Morrigan by Stewart Horn
The James White Award is a short story competition open to non-professional writers and is decided by an international panel of judges made up of professional authors and editors. The winning story receives a cash prize, a handsome trophy and publication in Interzone.

TTA Press is the publisher of the magazines Interzone (science fiction/fantasy) and Black Static (horror/dark fantasy), the Crimewave anthology series, TTA Novellas, plus the occasional story collection and novel.

About the Series: Interzone Science Fiction and Fantasy Magazine

You have subscribed to alerts for TTA Press.

You have been added to TTA Press's favorite list.

You can also sign-up to receive email notifications whenever TTA Press releases a new book.