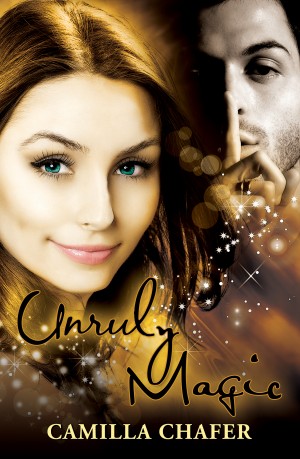 By Camilla Chafer
Rated 4.67/5 based on 3 reviews
A witch on the run.
A quiet little town where everything is far from normal.
A fractured witch council threatening to tear the supernatural world apart.

Life hasn't been easy for novice witch Stella but small town life seems to be agreeing with her. When a seemingly innocent girl begs for her protection, Stella is pulled into a dangerous game of unruly magic. More
From a USA Today bestselling author:

A witch on the run.
A quiet little town where everything is far from normal.
A fractured witch council threatening to tear the supernatural world apart.

Life hasn't been easy for novice witch Stella but small town life seems to be agreeing with her. When a seemingly innocent girl begs for her protection, Stella is pulled into a dangerous game of unruly magic.

With bewitching friends and two super-sexy mysterious men by her side, Stella is plunged into a mystery where she must uncover dangerous secrets before she ends up paying the ultimate price.

USA Today bestselling author Camilla Chafer is the author of the Lexi Graves Mysteries, the Deadlines Mysteries (a spin off from Lexi Graves), Calendar Mysteries, and the Stella Mayweather urban fantasy series. She is also the author/editor of several non-fiction books and has written for newspapers, magazines and websites internationally.

Visit www.camillachafer.com for free chapters, exclusive short stories, and all the latest news. Sign up for her mailing list to be in the know when the next book comes out.

I loved this whole series. I read the series in a few days. I couldn't put it down. I'm giving the series an overall 5. Book 3 is the weakest, but still good. I'll be watching the author for more fun in the future.

*Note: I always try to not write spoilers, but as book 2 there may be slight spoilers from book 1*

In the first book of this series, Stella Mayweather learns that she is a witch. She was moved from England to America to protect her life from witch hunters, she began training in her magic abilities, and she met and possibly lost new friends. At the close of book 1 Stella is in hiding from the witch council, she is confused and alone, and unsure of what to do next. At her new house, she befriends her neighbors, one of whom is the very sexy Gage who seems to be interested in her. Just as Stella is getting comfortable in her new life, her past catches up with her, and a young witch in trouble is asking for help. Stella is once again drawn into trouble with the council and left to question who is a friend and who is an enemy.

I really enjoy the Stella Mayweather series. Stella is an easy-going, every day type of heroine. She is a powerful witch, but she is new to her power and very humble. She can be socially awkward and unsure, but she is easy to like and relate to. In Unruly Magic, Stella is on her own for a good portion of the book, all of her friends from book 1 are unaccounted for, and Stella felt the separation. She developed a friendship with her neighbors, and began to be interested romantically in Gage. I love Gage, he's confident, sweet, loyal, and determined (and extremely good looking). All of a sudden, Stella's old group of friends show up and turn her newly settled life upside-down. Stella's friends don't ever really seem to think about Stella's feelings and her situation in all their witchy drama. With the return of the friends comes more romantic entanglements and confusion for Stella. I really did not like Evan much in this book, he is moody and possessive, and not in a good way. I hope that as the series continues, Stella begins to stand up for herself more and not tolerate the slights shown to her by her friends and romantic interests.

There was not quite as much magic in this book as there was in book 1. There was more focused story line and character building though. The magic that was in Unruly Magic was fun, and Stella continues to grow in her power and abilities. The paranormal community broadens in Unruly Magic, and Gage plays a larger role in that community.

With a well-written and developed story, engaging characters, and provoking romantic entanglements Unruly Magic is a very good read. I highly recommend this series to paranormal and urban fantasy fans. This is not a very dark series, but the paranormal and urban fantasy elements make for a great story and highly enjoyable reading. I would recommend reading this series in order.

Unruly Magic and everything about it is even better than the first book. I was glad I received a copy of the second book while I was reading the first one for a review. I was so excited and when I finished the first book. I just couldn't wait to read more from Camilla.

The story continues where Illicit Magic leaves us. As Stella regains her footing and goes back a few paces in reality by being alone again but at least with a few cheerful neighbors. Her magic grows stronger and she starts doing things without even trying one bit. Which is totally awesome. I love Stella even though her hints indecisiveness when it comes to men sometimes don't really appeal to me.

I literally was caught in these virtual pages (I was reading the e-book version). I just couldn't stop reading and only realized that I finished the book when well... when there was nothing left to read. And time really flew out the window while I read this. The story continues and the plot gets better and better and the characters get a little confusing and troublesome but thats all part of the book. This is one of those few paranormal series that manages to pull you into the story and takes you for an even more exciting ride with each book you read.

Overall, Camilla Chafer has created an amazing series that I'm looking forward to reading all the way to the end and this is by far the first e-book series I've read and continued to read with the second book and so on. Simply Unputdownable!

You have subscribed to alerts for Camilla Chafer.

You have been added to Camilla Chafer's favorite list.

You can also sign-up to receive email notifications whenever Camilla Chafer releases a new book.