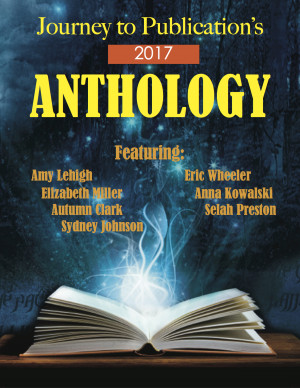 Supporting young aspiring writers, teaching young aspiring writers how to become authors, informing young authors about becoming published: these are the reasons for JLB Creatives Publishing’s curriculum, Journey to Publication. Several libraries around the country have used this publishing company’s curriculum for their own writing workshops, giving their top-notch young authors a chance to be published. This current compilation, Journey to Publication’s 2017 Anthology, published by JLB Creatives Publishing of Mount Dora, Florida, is the culmination of those workshops.

Please take some time to read and be amazed at the imaginations of these young authors. We promise you will not be disappointed, but rather awestruck, with their creations. There is such diversity in the stories presented herein, we know you will undoubtedly find something that strikes your fancy and/or touches your heart.
Download: epub mobi (Kindle) pdf more Online Reader
lrf pdb txt
Price: Free! USD
Add to Library
Create Widget
Tags: suspense poetry anthology fantasy paranormal short stories science fiction poems action adventure
About JLB Creatives Publishing

If you are looking for a 5 star author who leaves you wanting more in the realms of fantasy, historical fiction, and everyday life fiction you have found her! Author Janet Beasley is the retired CEO of JLB Creatives Publishing. She is a multi-talented, 5 star, award winning, #1 best selling author of epic fantasy, poetry, and historical fiction. Her main stay is epic fantasy where magic and enchantment abound. The Hidden Earth Series (when finished) will be a six novel/two companion book series. To this date: Jan 2018, Janet has published within the Hidden Earth Series Volume 1 Maycly the Trilogy, Volume Planet Land, and Volume 3 Planet Water, with Volume Planet Sky in final editing, and is currently writing Volume 5 Planet Fire,and Volume 6 SULs New Earth. The two Hidden Earth Series companion books consist of the cookbook, More Than Grilled Cheese and Tomato Soup, from her fantasy world of Maycly and a full color illustration book, The Chukkons Say Ye Need ta Be a-Seein' Maycly, depicting the animals, characters, terrain, and dwellings found on the fantasy world of Maycly. Using the pen name J.D. Karns she co-wrote with her 82 year old father, and published the 5 star historical fiction novel &quot;28 Months of Heaven and Hell,&quot; based on the journal of the WWII navy veteran, Carl Lee Young, who sailed the Pacific on the Melvin R. Nawman DE-416, during the war. In addition Janet has written for several anthologies, been published in trade specific magazines, co-authored non-fiction works, and is an award winning poet. Her hobbies include kayaking Florida&#39;s crystal-clear spring-fed rivers with her husband, photographing nature, playing ping pong, and baking cupcakes. Her loves of life include family, dogs, creating steampunk art and dressing in steampunk style, watching action-adventure and fantasy movies, and sunsets.

You have subscribed to alerts for JLB Creatives Publishing.

You have been added to JLB Creatives Publishing's favorite list.

You can also sign-up to receive email notifications whenever JLB Creatives Publishing releases a new book.