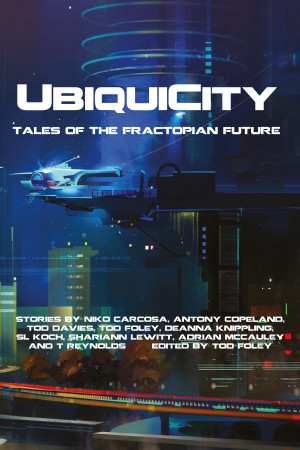 By Tod Foley
Imagine the World in 100 Years.
Nine authors collaborated to envision a “Smart City” of the first world 100 years in the future, exploring trends like ubiquitous computing, artificial intelligence, augmented reality, biotech, anti-aging and green technologies - alongside corporate governance and social upheaval. "UbiquiCity" is a work of interwoven fiction that might turn out to be very real. More
It is the dawn of the 22nd century, and in the sprawling metropolis known as “UbiquiCity,” the most wealthy and powerful districts possess all the latest in smart technology, with every building, device and control system connected via the Internet Of Things.

The world is augmented and identity is fluid. Satellite-guided cars drive themselves. Busy drones fill the skies. Cloud-assisted bots perform once-human jobs. Appliances, vehicles, buildings, media devices, products, streetlights, roadsigns and even toilets communicate electronically, all under the watchful eye of the AI CitySystem. For the inhabitants of the UbiComp zones, life is sweet.

But not everyone in the city is so blessed.

Tod Foley is a game designer, writer, programmer & technical director, founder of As If Productions, producer/host of the "Fractopia" podcast, and author of numerous roleplaying games and adventures including Other Borders (2016), DayTrippers (2015), Watch the World Die (2014), and CyberSpace (1989). Designer of the award-winning online "World of South Park" for Comedy Central, writer/producer of the live interactive theatrical presentation "Ghosts In the Machine" (CyberArts International, 1992), and senior editor of "PIX-elation" magazine (1993-1996), currently Tod is the curator and editor of the UbiquiCity Project, collaboratively creating an anthology series and a GameMasters Sourcebook for near-future science fiction roleplaying games.

Reviews of UbiquiCity by Tod Foley

You have subscribed to alerts for Tod Foley.

You have been added to Tod Foley's favorite list.

You can also sign-up to receive email notifications whenever Tod Foley releases a new book.