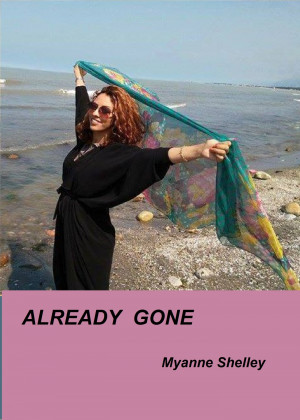 By Myanne Shelley
Rated 3.00/5 based on 1 reviews
After her husband is wrenched from her in a terrorist attack, Rachel Voight careens through the stages of grief. Then troubling questions arise – his computer was accessed after his disappearance, a secret account was closed. How well do you ever get to know someone, even after twenty years?
Download: epub mobi (Kindle) pdf more Online Reader
lrf pdb txt
Price: Free! USD
Add to Library
Create Widget
Tags: california literary fiction familiy relationships
About Myanne Shelley

San Francisco nonprofit worker by morning, cat volunteer by some afternoons, writer by others.

Glen and Rachel Voight, a married couple in their fifties, are on a brief vacation to New York City. After a day of sightseeing, Rachel has returned to the hotel to gather her energy while her husband continues to sightsee.

She’s waiting for him to return when she learns of a terrorist attack at a nearby nightclub. A man entered the club, sprayed the room with bullets, doused it with gasoline and then ignited it by blowing himself up.

When Glen doesn’t return to the hotel, Rachel’s anxiety mounts. When survivors identify her husband as being present at the time of the attack, and a surveillance camera backs it up, Rachel fears her worst nightmare is a reality. His jacket, found at the scene, confirms it. Because many of the bodies are burned beyond recognition her husband’s death is assumed, though never actually confirmed*.

Weeks after the attack, Nick, Glen’s brother, finds evidence Glen’s laptop has been used after it was assumed destroyed along with Glen in the fire. Was it stolen from the crime scene before the attack? When further anomalies are discovered including links to secret accounts, Rachel is left to wonder if Glen is dead or has just used the opportunity to disappear?

In Already Gone, author Myanne Shelley realistically portrays the emotions of someone thrust into these tragic circumstances while at the same time gradually sowing seeds of suspicion. But her unfolding of the plot takes too long, and in the end, nothing is resolved.

As in one of her previous novels I reviewed, Set It Off, Shelley does not include any dramatic action scenes; she seems to avoid them, preferring to spend the majority of time in her protagonist’s head replaying the events. Though this may be what traumatized individuals actually do, it doesn’t make for exciting reading.

Shelley writes well with good dialogue, characterization and realistic relationships between her characters, but her story lacks intensity. The other problem that becomes more glaring as the narrative unfolds with the absence of any startling revelations is the lack of motivation.

Why would Glen choose to disappear in such a dramatic way? Why would he inflict such pain on his family and sever ties forever with those he loved? There is no crushing debt, no illegal manipulations of client accounts; no harridan of a wife, nothing that is inescapable.

Wouldn’t it have been a lot easier in every way just to walk away from the relationship? People do it all the time.

After reading two of her novels written five years apart, Shelley’s writing has not improved over that period of time.

Not too long ago I read and reviewed Writing 21st Century Fiction: High Impact Techniques for Exceptional Storytelling by Donald Maas.

Maas had a few good ideas, but the basic premise was “go big or go home.” Write big stories about larger than life characters in life-altering situations.

Face it, most of us lead mundane lives, at least I do, and when we read a book we want to escape from it and be entertained by charismatic heroes challenged by and intriguing plots. As an author, if you’re not prepared to offer that you’ll have no commercial success, likely no success whatsoever. I’d recommend Shelley read Maas’s book.

But even if she isn't motivated by sales, she should endeavour to learn the fundamentals of storytelling.

Whether she writes to validate her interpretation of the world, seeks the fulfillment of connecting with readers, or simply to appreciate the satisfaction of producing a well-written story, she needs to hone her craft to achieve these goals.

Myanne Shelley has the potential to be a better author and writer; it would be a shame to see it squandered by lack of commitment. Remember what Nietzsche said, “Art is the proper task of life.”

Shelley’s books get credit for their evocative covers as well as being professionally produced and edited - error-free.

* Evidently, charred bodies can be confirmed through DNA if there is some idea of who the victim might be so a comparison can be made.

You have subscribed to alerts for Myanne Shelley.

You have been added to Myanne Shelley's favorite list.

You can also sign-up to receive email notifications whenever Myanne Shelley releases a new book.